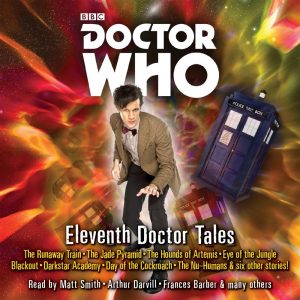 “He’s too young” they cried. “He’s too zany” they moaned. Whatever your impression of Matt Smith, our Eleventh Doctor, there’s no denying he left a mark on Who fandom forever. This collection is a sort of “best of” if you will and has arived just in time for Christmas. The stories that stand out in this collection, for me at least, are the ones that are read by Smith himself. Hearing the Doctor’s voice lends them an air of authenticity that some of the others seem to lack.

First up is the very enjoyable The Runaway Train. A typical Who mid-season adventure, which sees the Doctor landing slap bang in the middle of a historical event-in this case the American Civil War. An alien artifact has fallen into the hands of the Confederacy, so it’s up to the Doctor and Amy to round up a gang and retrieve said item. Not helping of course is the fact that it belongs to an alien race called the Cei who plan to use it to turn Earth into their new home world.  Also read by Smith is The Jade Pyramid. This time the Doctor and Amy find themselves in medieval Japan. Again, with its ninja’s, ancient pyramids and samurai soldiers, this is another enjoyable mid-season type romp.

Rock fans of a certain vintage, will know the name Jason Arnopp, through his association with Kerrang! Magazine, but he’s also written a few Doctor Who short stories and it’s one of these, the excellent The Gemini Contagion where things really start to pick up. Read by one of the UK’s best loved actress/comedians Meera Syal, who is no stranger to Doctor Who herself (Meera played Nasreen Chroudhry opposite Matt Smith in two episodes), the threat facing the Doctor and Amy this time is…Hand wash…Yup! A new anti-viral hand wash named Gemini has been laced with a microorganism which makes the user fluent in every language, only it’s not been tested on humans. When humans try it they are compelled to violently communicate in every language to one another all at once. Of course the Doctor finds himself trapped with cargo of this stuff on a spaceship which is making a beeline for Earth, where he discovers that there are two more stages of mutation. Sound ridiculous?, of course it does, but some of the best Who stories always are and Arnopp’s background as a horror author gives this particular story an extra edge. Darren Jones’s The Eye of the Jungle is given some extra clout when it’s read by David Troughton as is Darkstar Academy  which is read by the instantly recognizable voice of Alexander Armstrong. There are also several episodes featuring the lovable Rory Williams, which are read by Arthur Darvill, and like the Matt Smith stories, having the actual actor reading it to you adds something extra to the experience.

It’s quite easy to imagine any of these stories transferring the screen, which is testimony to the level of writing here. This fourteen story collection has been well put together, with thought clearly having gone into their running order, so as to give it the same sort of feeling as the television series. An excellent collection which will fit neatly into any Whovian’s stocking this Christmas…….. Chris Andrews