Warning: mysqli_query(): (HY000/1712): Index wp_options is corrupted in /var/www/vip4/sites/vip6102689/httpd/htdocs/wp-includes/wp-db.php on line 2056
 Doctor Who and the Day of the Daleks - Read by Richard Franklin & Written by Terrance Dicks – CDx4 (BBC Worldwide) - Mass Movement
x
Spread the love 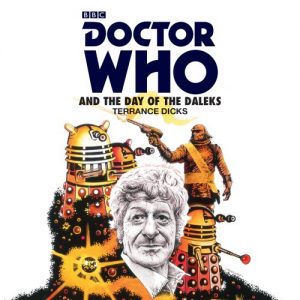 Well, there’s no mystery about this story. The Daleks have conquered the Earth, are reigning supreme, and are finally having their “day in the sun”.  Until a small group of freedom fighters decide to throw a spanner in the works and launch a desperate gambit to save humanity and rid the planet of the Sons of Skaro. Set in the 1970’s or 1980’s, depending on how you perceive the UNIT / Doctor timeline, and the 22nd century, Day of the Daleks serves as both a classic UNIT tale featuring the inaugural encounter between the Brigadier and the Daleks and also a gritty harrowing story of survival in the future under the brutal regime of fascist alien army.

Beginning with a scene not shown in the original television serial, in which a group of rebels begin to concoct the early stages of their plan to overthrow the Daleks, events in Day of the Daleks quickly unfold as we are transported to the present day and join UNIT, the Doctor and Jo who are called in to investigate a ghostly sighting at the house of a very important diplomat, Sir Reginald Styles. As always with these things, The Doctor and Jo soon find themselves caught up in the drama and are whisked into the future where the Doctor, once again, comes face to face with his mortal enemies.

Richard Franklin, aka Captain Mike Yates, narrates proceedings and you can hear the pleasure in his voice as he relives a story he starred in over forty years ago. This is classic Who at its best, and oddly, despite being nine years into its run this was the first time the show dealt with an alternate timeline and the possible effects of paradox – not counting Inferno, as that was partially set in a parallel universe. With all the timey wimey stuff in recent Doctor Who stories, it’s probably safe to assume that Steven Moffat and company were inspired and influenced by this wonderful adventure that in turn, was influenced by Ray Bradbury’s Distant Sound of Thunder and the ultimate time traveller’s conundrum, the Butterfly Effect. Time and the Daleks, what a perfect combination… Nath Rixon