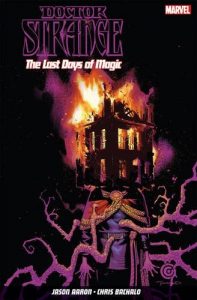 And now the end is near and magic faces the final curtain; and as it faces its darkest hour, it’s up to Stephen Strange and his fellow magicians and sorcerers to keep magic’s spark alive in the face of overwhelming odds. While Jason Arron’s first volume of Doctor Strange recast him as an almost street level magician, safeguarding his neighbourhood, and to a larger degree New York, and its residents, in The Last Days of Magic, his sphere of influence and protection is, forcibly, extended to include all of Earth. Invaded by the Empirikul, a pan dimensional army whose overwhelming faith in science has caused them to seek out, and destroy, all magic and its practitioners wherever they find it, as the Last Days begins the sorcerers of Earth have all but been defeated, and Aaron paints a grim picture of a world bereft of magic and the effect its loss has upon humanity and…well, just about everything else.

With the stage set, it’s time for the second act in which the underdogs in this battle for the very future and existence of magic, having been dealt a devastating and potentially fatal blow, regroup, gather their wounds and begin to plan their counter attack. Who doesn’t love a good underdog story? It’s like Star Wars all over again, with Doctor Strange leading the Rebellion against the vastly (or so it seems) superior dark forces of the Empirikul’s Empire. Except that it’s set on Earth and the war is being fought for magic, and even though there’s a nod or two to George Lucas’s second most famous archaeology obsessed  creation, that analogy of the little guy facing down the big bad bully, is about as close to the story of a Galaxy far, far away as it gets. That said though, The Last Days of Magic does have the same kind of underlying energy and excitement that Star Wars was, and is, imbued. Much as I love Lucas’ most favoured child, Jason Aaron’s tale of things that lurk in the basement and the quest to track down the last magical artefacts left in the world in order to begin the eventual fight back against the enemy of everything that Doctor Strange and his allies hold dear, is superior to it in one way. While George couldn’t, and can’t write dialogue to save his life, Jason can.  In fact, if lives depended on it, Jason Aaron’s dialogue would be more akin to Flash Gordon than Han Solo, because it would, and could, save every one of us. Yeah, it’s that good.

The Last Days on Earth is proof positive that lightning can strike twice and that Aaron’s initial five issues, collected as The Way of the Weird, weren’t a fluke. Together with his incredible art quartet of Bachalo, Romero, Beyruth and Perkins, he knocks it right out of the park again. It’s a masterclass in both literary and visual storytelling, pacing and characterisation, in which Aaron explores the virtues and drawbacks of self-realisation and sacrifice, reinvents Doctor Strange for the Twenty First century and in doing so, makes him appear far more human and effortlessly cool in the same sort of way that Tony Stark that is and re-establishes and adds his own twist to the magical mythology of the Marvel Universe.  Oh, and the story? It’s one of the most compulsive and thoroughly entertaining tales that you’re likely to read this, or any other, year, but I don’t want to talk about it too much, because I hate spoilers as much as, and probably more than, the next guy. However, I will, and have to, share a little something with you, because it’s too good to keep all to myself. You know that all too often difficult good and evil balancing act that some writers have when it comes to villains? The one that all too often see’s the bad guy disappear into an uncontrollable fit of moustache twirling exposition that end up leaving him as nothing more than a two dimensional caricature rather than becoming a fully developed, rounded character whose motives and reasons for action are grounded in some sort of believable tragic backstory that forces them to take the path they do? Well, Jason Aaron avoids that trap in The Last Days of Magic, and thanks to relying on none of the nonsensical facial hair manipulation and instead concentrating on copious amounts of intelligent, considered and creative personal history and back story, at times almost has you rooting for the scoundrel of the piece. Which he would almost would have gotten away with if it hadn’t been for that meddling Doctor Strange being such a likeable, immediate, hip and happening character. And that folks, that’s magic… Tim Cundle