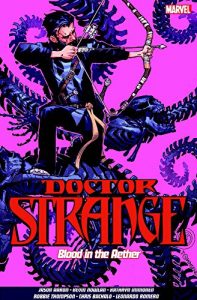 With the Empirikul defeated, things can slowly start to get back to whatever it is that passes for normal in Stephen Strange’s world. However, vanquishing the would be invaders didn’t come easily and Earth has paid a heavy magical price, losing almost all of its sorcerous energy in the battle between Doctor Strange and the non-believing alien horde.  As the good Doctor relies on magic to maintain his position as the Sorcerer Supreme, he finds himself somewhat weakened and desperate to find a way to replace what was lost so that the Earth’s magic can be replenished anew. The problem is, while he’s at his weakest and waiting for the magic to return, that’s when the biggest and the baddest of his arch-enemies (Hey, I know normal folks only have one mortal foe, but Stephen Strange gets around and he’s made a lot of things, in a lot of different dimensions, angry in his time) decide that it’s about time that they settled their scores with him, once and for all.  And Blood in the Aether is the story of the week they all came knocking on Strange’s door.

Jason Aaron’s run on Doctor Strange has been nigh on perfect, and Blood in the Aether adds another home run to his record sheet. Having Stephen fight Mordo, Satana, Dormmamu and more in a continuous winner-take-all magical contest while he’s bruised, battered, on his knees and forced to rely as much on his wits and cunning as he is his knowledge, fits in perfectly with the new street smart, mercurial Doctor Strange. He’s a Sorcerer Supreme for a new age and the mixture of savvy, wise-cracking dialogue, nimble and ingenious plot and perceptive characterisation in Blood in the Aether consummately reflects this. And when that kind of exceptional story-telling is teamed up with the eye popping and jaw dropping artwork of Bachalo, Nowlan and Romero, you’re looking at a book that should be riding head and shoulders above everything else on everybody’s pull list. If you’re not reading Doctor Strange already, drop everything you’re doing, get on the phone to your comic shop and make sure it’s waiting for you the next time you walk through its hallowed doorway. It’s the book that all the coolest of cool cats are hip to. Trust me on this, I know what I’m talking about. You don’t want this book, you need it… Tim Cundle