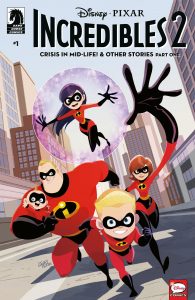 It’s no use, try as I might, I just  can’t hide it anymore, so I guess it’s time that I came clean with everyone and finally admitted to all of you what, up to this point,  only my nearest and dearest have known.  “I’m Tim and as well as being a punk rocker, middle aged hardcore kid, comic book fanatic and devoted to geek culture, I’m also a rabid Disney addict”. Wow, feels good to get that out that, to be able to stand tall and tell everyone that I’m just as happy lounging about on the sofa, watching The Aristocats, Blackbeard’s Ghost, Lilo and Stich or Frozen as I am when I’m crammed into the front row of some sweaty venue, singing along with either Greg Graffin, Ray Cappo or Roger Miret.

I’m Tim and I’m a Disney fan and it feels great to be able to share that with you. And one of my absolute favourite Disney films, probably because it features one of the other enduring loves of my life, superheroes, is The Incredibles. Okay, so strictly speaking, it’s a Pixar film, but as Disney have owned Pixar since 2006 (two years after the release of The Incredibles), the ongoing adventures of the Parr family are now part of the Mouse stable. Which means that The Incredibles are now Disney through and through, and as such appeals to two separate levels of fandom, which makes it twice as awesome. At least it does in my mind.

Anyway, I digress. Where was I? Oh right, yes, I was about to tell you about Crisis in Mid-Life! & Other Stories, the debit issue of The Incredibles 2 from Dark Horse. Fourteen years after the release of the first film, Mr Incredible, Elastigirl and their super-powered kids aren’t just returning to the silver screen, they’re also making their debut in the four colour universe and taking their place in the wider costumed crusader pantheon.  And right from the off they, thanks to the creative team responsible for their collective destinies, knock it right out of the park.

Split into three separate stories, two ongoing and one self-contained, Crisis in Mid-Life is a fun, lightning quick, snappy and surprisingly engaging and involving read that perfectly captures the essence of the Parr’s. The art is superb throughout, the likenesses of the characters spot on, the detail fantastic and the trio responsible for it, Greppi, Bone and Girihiru deserve a round of applause and a couple of hundred “Huzzahs” for effortlessly transferring the characters from screen to page. Then there’s the stories. The first two of which (the ongoing, serialised arcs), courtesy of author extraordinaire Christos Gage, instantly grab you and pull you straight in and deal with the realities of old age, of succumbing to the march of time and trying to find a way to remain relevant while society reminds you that your best days are behind you and the importance of family, while the third and final tale is a laugh out loud funny romp from Landry Q Walker, in which Jack-Jack saves the day when Bob becomes distracted during a day out in the park.  Mid-Life… is a seriously good start to what promises to be a wonderful book.  The Incredibles are still incredible… Tim Cundle