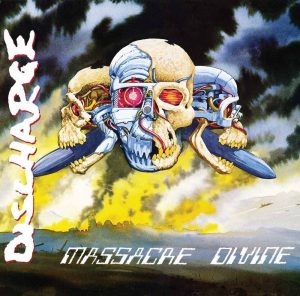 Just as Discharge releases an absolutely blistering new album that is designed to blow away all cobwebs, Westworld records have deemed it fit to reissue their 1991 album “Massacre Divine”. After their unintentionally hilarious excursion into glam rock with “Grave New World”, this sees Discharge return to a heavier metal sound. You can hear the early 90’s all over this release. It is mostly mid-paced metal in a similar vein to many of the earlier thrash bands that slowed things down after a couple of albums. The riffs are heavy and with just the right amount of rock-meets-metal going on and married together with time signatures that chop and change all over, musically they keep things interesting. OK, but there is also a couple of reasons why this record isn’t remembered as part of Discharge’s classic back-catalogue.

Vocalist Cal this time around goes for a Brian Johnson sound, but sadly without any of the charisma or the ability to actually carry a tune. The vocal delivery is simply high pitched without having any sense of melody or feeling. Add to that some slap bass interludes here and you have yourself a few very cringe-worthy moments.

It’s not all horrible, but in all honesty, fans should really be checking out the new album “End of Days” rather than this ghost in the closet. Tom Chapman