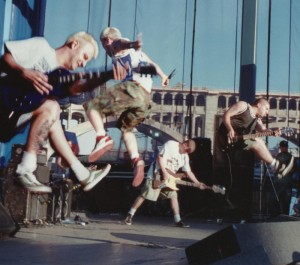 The decadent, wayward psalms of Cleveland’s legendary, end-time metallic hardcore entity, INTEGRITY, continue to be reissued onto the masses, as Magic Bullet Records confirms the impending release of two more titles in October, including an official reissue of the Den Of Iniquity rare/early works collection, as well as a remixed and remastered 20th Anniversary edition of the iconic Humanity Is The Devil album.

INTEGRITY‘s groundbreaking Humanity Is The Devil, has long been regarded as the album that completely turned both hardcore and metal on its head. Originally released in 1995, the recording initially sent a mammoth shockwave through the underground, as the band had crafted a proprietary sound wherein metal and hardcore had simply not been fused before. Phrases like “metallic hardcore” and “metalcore” came into prominence within the popular lexicon only after everyone heard what INTEGRITY was doing on this album in particular. Further, singer Dwid Hellion’s foray into much darker, psychological depths lyrically served to raise the bar and open the floodgates for countless others to break away from the trappings of traditional hardcore and metal fodder. To describe Humanity Is The Devil as seminal both in the band’s career and the metallic hardcore genre on the whole would only serve to yield a “yeah, no shit” out of anyone who lived through it at the time.

To celebrate the enduring impact and power of the album, a special remixed and remastered 20th anniversary version of Humanity Is The Devil has been created. Painstakingly mixed by Joel Grind, under guidance from INTEGRITY guitarist Aaron Melnick and vocalist Dwid Hellion, and mastered by Brad Boatwright — both at Audiosiege — the 2015 treatment of this epic recording do the album even more sonic justice and fidelity than was remotely possible in 1995. The result is an even wilder and somehow more visceral experience from start to finish, an album that still stands head and shoulders above anything else. The Humanity Is The Devil: 20th Anniversary Remix + Remaster features an updated treatment of Pushead’s iconic album cover, a new painting from visual artist Josh Bayer, complete lyrics from Hellion, an updated narration from Hellion himself on the album’s final track, and much more.

Den Of Iniquity is a massive, twenty-three song collection of rare tracks spanning “The Melnick Era” (1988-1998) of INTEGRITY. All material is culled from various demos, split 7″s, 7″ singles, compilation appearances, and EPs. In short, this is all the hard-to-find non-album stuff of that era, fully remastered with modern vibrancy. Clocking in at a whopping sixty-six minutes, the material represented in this historical documentation includes the Grace Of The Unholy single, Harder They Fall demo, Taste Of Every Sin CD, the split 7″ releases with Hatebreed, Mayday, Pale Creation, Kids Of Witney High, Psywarfare and Lockweld, tracks from the Dark Empire Strikes Back and No Exit compilations and live bonus tracks. The physical version of the Den Of Iniquity reissue includes extensive liner notes from guitarist Aaron “A2” Melnick on the recording sessions for each track and exclusive artwork from singer Dwid Hellion.