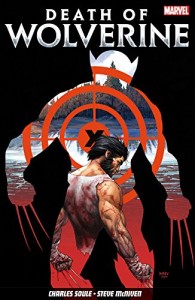 Death of Wolverine – Charles Soule & Steve McNiven (Marvel / Panini)
It happened. It finally happened. Wolverine died, and like all heroes and heroines, the way in which he eventually met his demise was… Wait, a minute that’s a spoiler and you know the golden rule. We don’t do spoilers. That’s what the internet is for, so if you want to know, hit the Google, because I’m sure as heck not going to tell you. Let’s just say, that no matter what you may have heard (probably thanks to the damn internets and the googles), if the words ‘Snikt’ and ‘Bub’ have become part of your vocabulary thanks to the much loved, and now much missed, Canadian Berserker, then you’re going to want to spend a couple of hours, at least, with this book.

It’s a slightly odd affair though as the majority of the story is spent knee deep in gore, with every mercenary and thug-for-hire going in search of the rather large bounty that’s been placed on Wolverine’s head. When they find him, well, that’s where the gore comes in to proceedings as you might expect; gut them like fish and hang them out to dry… Having grown tired of being the hunted, and after a particularly vicious run-in with Nuke, Wolverine becomes the hunter and sets out to find the money man. Remember I said the take was slightly odd? The pay-off is why, as having found what he needs to, and meeting his nemesis face-to-face, the ending, the grand finale sneaks up on you out of nowhere, and feels a little rushed. And as its Wolverine, I kind of expected a little more, for it to last longer, be more drawn out, but I guess that for most people, that’s how death is, sudden and unexpected. So why should it be any different for Wolverine?

Charles Soule has taken a lot of flak in some corners of fandom for the way the book ends, but to be honest, I kind of like it. It ends how it began, which for a character like Wolverine is apt and more than fitting, and thanks in no small part to the wonderful artwork of Steve McNiven, its impact is more than a little heart-breaking. But let’s not kid ourselves folks, death is never forever in comics (unless you’re Uncle Ben) and I can already think of at least thirteen ways in which Logan could eventually return. For now though, he’s gone and as far as I’m concerned, he went out with style and in a way he would have liked. He was the best at he did, and he will be again. So long Bub, we’ll see you soon… Tim Mass Movement