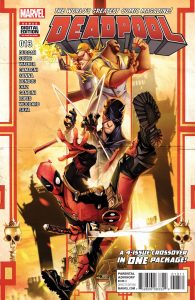 The only person in the Marvel Universe who doesn’t find Deadpool arduous, impossible and infuriating is Deadpool. And that’s probably because he’s crazy. Actually, that’s not true, he does have a couple of friends that he can rely on, but in Temporary Insanitation, that number decreases by a single digit as he loses one of the his staunchest companions to the debt that all men pay.  But before he faces the misery of his world shrinking that little bit more, Wade is hired to protect an investment banker who put the wrong people’s money in the wrong places. When those people came to collect what they thought was rightfully theirs and discovered it had gone up in smoke, they turned on the financial magician who made their filthy lucre disappear. Which is almost certainly why he, in turn hired Deadpool to protect him, because bad guys don’t mess around and when you’re up to your eyeballs in trouble with them, you need to find someone who doesn’t play by the normal rules to keep you safe.

Having undertaken the job, Wade finds himself trying to negotiate a place on the Witness Protection Programme for his client while fending off legions of organised crime assassins (with a little help from Daredevil, Power Man and Iron Fist) led by his female nemesis Typhoid Mary who just wants to see Deadpool squirm and to take the head of the rogue banker she was sent to dispose of. All in all, it’s just another day at the padded office for Wade, who then finds himself caught up in the war against the Empirikul to save magic, fighting alongside Doctor Voodoo and his comrade in arms, Michael Hawthorne to prevent the armies of darkness blanketing the world in their stygian shadow.

Temporary Insanitation is exactly the kind of tale that fans want, need and expect from Wade Wilson. Frantic, funny and at times irreverent, it’s a straight forward story that’s anything but straight forward in its delivery and serves up page after page of action packed mayhem, laugh out loud dialogue and copyrighted Deadpool brand insanity. Which makes the final gut punch of the last few pages all the more poignant, as it helps hammer home the true cost of victory and reminds the reader that nothing lasts forever.  It looks, as you’d imagine given the line-up of talent who worked on the book, every bit as good as it reads and the assembled team of creators should take a collective bow as they’ve fashioned something truly spectacular. Wade Wilson, I salute you… Tim Cundle