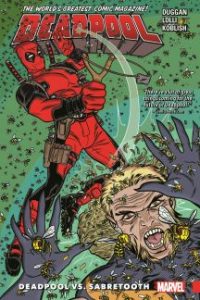 If you spend long enough in the same business as Wade, and you’re good at what you do (which you’d have to be, otherwise you’d be dead) it’s pretty much guaranteed that you’re going to make enemies. Killing people, overthrowing governments, protecting wrong ‘uns from the forces of law and order in all of their guises and hurting folks for money are all nemesis magnets; and when they’re all part and parcel of your job description, then foes are going to be attracted to you in the same rabid way that Winnie the Pooh pursues honey.  And old Wade Wilson or Deadpool as he’s more commonly known, has been doing what he does for a very long time; but in Deadpool vs. Sabretooth, instead of one of his, doubtless many, adversaries coming after him, he goes in search of the man that he believes killed his parents in order to finally balance his books and his own very wobbly, often malfunctioning, scales of justice. There are a few problems with Deadpool’s personal mission though. Minor issues, like the man he’s seeking, is Sabretooth who, even with his new found sense of purpose and need to atone for the multiple misdeeds of his past, isn’t the type to go quietly, and the fact that Wade’s information about what the big bad mutant did to his family might not exactly be on the level or one hundred percent accurate. But problems schmoblems, because while everything that has set events in motion might be a load of hooey, it doesn’t change the fact that when Deadpool and Sabretooth’s paths cross, a whole lot of violence, mutual hate and blood, guts and gore gets spilled on the crimson, mine-filled path to understanding and acceptance.

Gerry Duggan’s blackly comic tale of revenge, retribution and penance plays out almost like an old Spaghetti Western, with the son seeking the now reformed gunslinger who done him wrong in order to satisfy his own ideas of jurisprudence. Told from both perspectives, with the accused trying to hide the awful truth from his accuser, it zips along in good old Deadpool style, and has more than few nasty surprises in store for the “hero” of the story. Koblish, Lolli and Coello do a mighty fine job of bringing Duggan’s humour packed, action filled story that’s bursting with wise cracking dialogue into deliciously detailed, eye pleasing being and between them they serve up another double thumbs up dose of Deadpool fun. And then, they give it a little extra zing and nudge it over the cliff into double double thumbs up with a cherry on top territory, by finishing things off with another entry in the Deadpool 2099 files. Which is a little out there even for Wade and takes whacky to whole new level with its prison escape and numerous Deadpool’s all vying to be the one and only time proof and future fried Merc with a Mouth.  If insanity was contagious, then just touching Deadpool vs. Sabretooth would earn you an access all areas pass to, and full bed and breakfast in, the local asylum, which is, let’s face it, is what makes this book so darn entertaining and guarantees that once you start reading it, you won’t want to stop. Because being cuckoo is cool and being normal is boring and normal folks have no fun. So who wants to be normal? No-one, that’s who.  Let’s go crazy… Tim Cundle