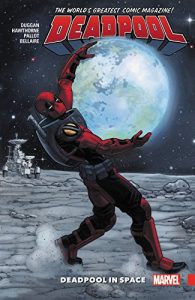 You know what the first thing that steamrollered its way into my brain when I initially clapped eyes on the latest instalment of Wade Wilson’s adventures was? It was the title song from a long running Muppet Show sketch.  Yeah, as soon as I saw the title, I didn’t think about Deadpool twirling his katana’s and chopping off limbs here, there and everywhere while filling bad guys full of bullet sized holes, all I could hear, bouncing around inside my skull after my subconscious switched on my cranial speaker system, was   “Pigs in Sppppaaaaccceee….” . I guess that Miss Piggy had a far greater impact on my impressionable young mind than I’d previously given her credit for.  That said, I was more than a little intrigued by the possibility of Deadpool being launched into space and actually muttered out loud, probably because the theme to Pigs in Space had completely overwhelmed my inner monologue, “Houston, Wade Wilson is a go for launch…” as I opened the cover and dived headlong into the latest crazy escapades of the merc with a mouth.

Obsessed with a finding a way to rid himself of Madcap, Deadpool theorises that the only reason he’s previously failed to subdue his nemesis, is because said foe cannot be killed by Earthly weapons or means. So Wade being Wade, heads into space to find some sort of technologically advanced gizmo that will enable him to do away with the impish blaggard threatening nearest and dearest once and for all. And that’s where the murderous mayhem and homicidal fun begins, as once he’s out in the Cosmos his quest to discover the ultimate artefact of destruction brings him into direct conflict with the Brood, Asgardians and the Nova Corps, the latter of which now feature a commanding officer already well acquainted with Wade.  As with all of Deadpool’s misadventures, his foray into space culminates in, following the usual rib tickling series of one-liners and laugh out loud moments, a rather impressive body-count and muted success. Unlike the previous chapters of his life’s story so far though, as the curtain descends on Deadpool in Space, our fourth wall shattering anti-hero is recruited for some sort of special mission by the red, white and blue toting Nazi of the hour, Captain America. So whatever happens to Deadpool next, you just know it isn’t exactly going to be a bed of roses for anyone, and everyone, involved.  Oh, and there’s also a brief interlude in which Wade is cast into the world of the comics UPC codes and has to figure out to escape it, which is all sorts of whacky whacked out banana’s fun but doesn’t make an awful lot of sense. Kind of like everything that happens to, and around, Wade.

Gerry Duggan is having a ball writing Deadpool, or at least that’s the way it seems, as he transfers every single bit of the good time that he has writing the character on to the page. Witty, acerbic and always on point, Deadpool World’s Greatest is one of the go to books that you can always depend on to make you smile and lift your spirits, because you know no matter how bad things get, they’re always exponentially worse for Wade. Kicked into high orbit by the rocket propelled pencils and art of Mike Hawthorne and Scott Koblish, Deadpool in Space ticks all of the right Wade boxes and tips a merry one finger salute in fine Deadpool fashion at every stiff, tired and over-tested comic convention and stereotype and has a ball while doing so. And once it got going, it even made me forget about Miss Piggy and her crew of intergalactic porcine explorers…  Tim Cundle