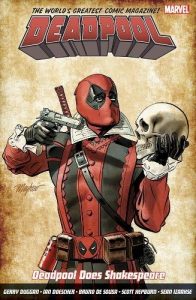 Forsooth and gadzooks, Wade hath outdone himself this time as he’s plunged into the mire of Shakespeare’s creations and is up to his ornate collar in the myriad machinations and devilish deceptions that the bard delighted in wrapping his players and dramas in. Trapped within the confines of Will’s world, Deadpool finds himself at odds with, and entangled in, the conspiracies of the characters with which Shakespeare made his name. Staying true(ish) to the language of the period, Ian Doescher (the chap who translated the original Star Wars trilogy into Shakespearian drama’s) casts Deadpool adrift in a miasma of plots within plots and schemes within schemes, from which our hero untangles himself the only way he knows how. With lots of gratuitous violence and by being himself, which even on his very best day, is more than most people can ever bear. Then having left the stage behind, he sets off in pursuit of Madcap once more, this time ruining his Valentines date with his wife and becoming involved with the affairs of the Russian mafia in an effort to finally deal with his “nemesis”.  And in the closing chapter of this volume, Wade becomes the murderous vessel through which the finger of suspicion is finally pointed toward Captain America by one of the most meticulous and mindful investigators in the Marvel Universe, Phil Coulson.  In the aftermath of a wildly ambitious and amateur assault by a trio of time travelling desperado’s, Steve Rogers account of events doesn’t quite tally with the facts that Coulson knows are true, forcing Phil, who isn’t not  fond of things not adding up, to begin secretly examining the life and times of the one man he always thought  was beyond doubt, Captain America.

One of the most dependable books doing the rounds at the moment, Deadpool World’s Greatest, lines up its sights, takes aim at the target, closes its eyes, squeezes and the trigger and scores another bullseye. While Doescher’s Shakespearian opus is fun, witty, plays with established literary convention in a light-hearted way and is almost worth the price of admission by itself, it’s Gerry Duggan’s ongoing story that makes Deadpool Does Shakespeare essential reading. All of the requisite Wade-sism’s are in place and in fine fettle, the dark humour, the violence, the damn-this-guy-is-good dialogue and characterisation, the gore spattered, eye popping artwork and that’s all fine and dandy and as welcome as a big bag of cotton candy, but it’s the fact that it’s here, in these pages that Rogers is rumbled that makes it a must have for any die-hard, or even slightly casual, fan of all things Marvel. And the fact that Deadpool Does Shakespeare looks as good as it does and that the tales it tells are all mightily impressive, well that’s just an added, and very welcome, bonus. Cry havoc and let slip the Wade of war… Tim Cundle