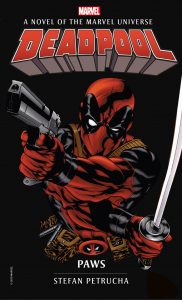 So, he finally went and did it. Old Wade not only made the crossover into his own feature film franchise, but he’s also leapt into the world of the literary novel with a little help from author, and vessel  through which his spirt is channelled from the Marvel Universe (which at one point Deadpool killed everyone, well everyone of not anyway, in, but that’s another story) to the printed page, Stefan Petrucha.  PAWS finds Deadpool employed (albeit on a freelance basis though, as no respectable law enforcement agency would give a psychotic, homicide happy lunatic a “proper” job right? of course they wouldn’t) by S.H.I.E.L.D., to seek, locate and destroy puppies. Yeah, that’s right; puppies. But before you start panicking and writing to PETA, the RSPCA and your Member of Parliament about that dreadful Deadpool and the awful things he’s doing to young canines at the behest of the “government”, you need to calm down, swallow a fistful of Valium and stop worrying, because these puppies aren’t the normal, fluffy, cute, playful type. Oh no, these puppies are really genetically modified killing machines disguised as everyone’s favourite pets in an attempt to infiltrate society before transforming into their true selves and destroying everything, and eating everyone, within a ten mile radius. These are bad doggies and it’s Wade’s job to stop them; to find out who created them and why, and bring the whole insane science project to an end. However, as with all things involving Deadpool, it doesn’t go exactly to plan. And while most of it works out in the end (and that’s not a spoiler, as hey it’s a superhero story and they always close on a happy ending. Usually. Sometimes. Uh, would you believe every now and then? You would? Good), it does so in the usual crazy, balls out, mayhem filled and action packed manner that we’ve come to expect from Wade Wilson.

Petrucha’s story is built around the sardonic, wise cracking humour that’s implicit in its hero’s personality, and he writes the story as if Deadpool were telling it directly to his audience over a drink or twenty at his favourite bar. His comic book style prose is imbued with more than enough imagination, wit and intelligence to ensure that Wade’s debut novel is a resounding success.  In an elaborate plot that incorporates monsters, Hydra, S.H.I.E.L.D. and more, Petrucha never forgets that Deadpool knows he’s a construct designed solely to bring entertainment to his audience and in the sometimes touching (emotionally, not the late night, all alone, thinking about Raquel Welch variety), but always funny story, he also explores the way Wade interacts with other heroes, sheds some light on his early life and even allows a little romance to enter his life. PAWS doesn’t just shatter the fourth wall, it tears it down, jumps up and down on its remnants and throws the left over gravel, scree and loose bits of brick at anyone and everyone within its proximity.  It’s hugely enjoyable, one of those books that once you’ve started, you can’t put down, even if your house is burning down around you, and even though, stylistically it’s unlike anything you’ve read before or anything you’ll ever read again (unless there’s a sequel, and if you’re listening Titan, why don’t you just go ahead and greenlight PAWS 2: Mr Snuffles Revenge, because you know you want to. I want you too, the folks out there want you too, Deadpool wants you too and I’m pretty sure Stefan does too) it really is a literary riot.  And as KC and the always on point Sunshine Band were so fond of saying, that’s the way I like it… Tim Cundle