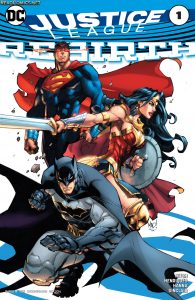 The DC Rebirth continues apace and its flag ship product, Justice League, gets the treatment as a massive, ridiculously gnat type beastly bug sits over an equally enormous city skyline. This is of course, a job for the Justice League and Justice League Rebirth serves as a way to introduce us to the old guard – the Bat, the Amazon, Cyborg, the Scarlet Speedster and Aquaman – as well as lay the foundations for those that may not know who the new Green Lanterns are and are wondering why Superman isn’t flying in to add his two penneth worth. It’s functional and does the job. Functional and “doing the job” isn’t quite good enough for the Justice League though is it? Especially with the potential movie franchise in the offing post Batman vs Superman … 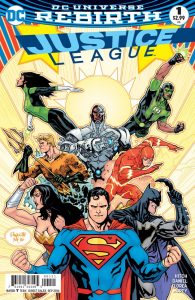 The latest story starts properly then in Justice League Rebirth #1 and, yes, it does promise a “big” storyline. All around the world monstrously large earthquakes are levelling cities, tsunamis are rising up out of the oceans and buildings are toppling. The Justice League are all hands on deck … well, except for one notable “big blue” absentee. The issue you’ll always have with titles like Justice League is that of ensuring there is enough of an over arching story while giving everyone enough screen time to be a fully fleshed out character rather than a caricature. This of course, could be just another “Justice League face an extinction level, end of the world threat and must band together to fend it off” run around, and it does come across as that to be honest. The Rebirth twist however, has done its job and laid enough crumbs to follow that promise maybe, just maybe this time, there’s more to it than meets the eye. Simon and Jessica, the new Green Lanterns charged with protecting Earth, are new and nervous. Coming to grips with the powers and responsibilities thrust upon them by those little green rings and not to mention, Hal Jordan himself is not easy. How long Jessica’s continual anxiety about her abilities will engage readers and their constant bickering will hold our attention remains to be seen.  Flash, Cyborg and Aquaman are all busy saving folk, Bats is doing his dark detective thing and Wonder Woman, well, Wonder Woman is just being rock hard and awesome and stuff. 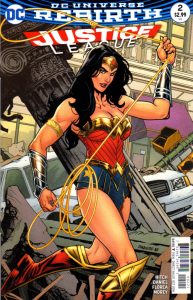 Justice League Rebirth #2 picks up in the aftermath of the earth moving first issue and explores the mysterious force that seems to be possessing people who are reduced to wittering on in zombie like mantras about “Lost words” and Awakening”. This suggests we are going to meet the culprit sooner rather than later as the Leaguers convene on the Moon to fathom it all out. The elephant in the moon based room is of course, where’s the new Supes? Will he take up a role in the Justice League as his predecessor did? Can they trust him like they did the last one and will he even want in on the super squad? They’d better make their mind up soon as a swarm of massive bugs are attacking Gotham, Atlanteans are rising in to a giant mega blue man and the source of the earth quakes presents something of a challenge if it’s to be defeated …

For a new take on the title, Justice League Rebirth does strike me as more of the same but the old trick of reimagining and rebooting has opened up a myriad of possible story lines outside of world saving shenanigans. The new Lanterns have it all to prove and we still don’t really know the full story of the new Superman. That will of course run across a number of titles in the coming months including the back to “pre-New 52” Action Comics 957 to 961 and again, there’s a sense of déjà vu as a certain Doomsday is back to fight the man in tights, or the new one or whoever … 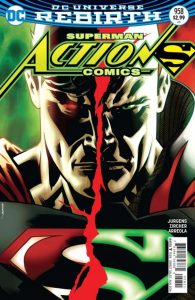 Those of you that are keeping up will be aware that New 52 Superman is dead and 90s Death of Superman, who was dead back then but came back, has erm, come back again. He has a wife – Lois – and a son – Jonathan – in tow and SuperLex is also flying around looking a bit like Steel from the 90s. I already said déjà vu didn’t I? The first few issues deal with the titanic scrap between the new/old/whatever Superman and Doomsday while Jimmy Olsen snaps away and tries his damndest fathom out who Clark Kent is and why he’s stood watching Superman face off with Doomsday. Yep, that’s right, Clark Kent has also turned up but not Clark Kent who is New 52 Superman as he, obviously is dead, and surely not 90s Clark Kent as, well, he’s up there trading punches with Doomsday … again. If Justice League left a few threads that might turn out to be page turning stuff, Action comics looks like it’s gonna be off the scale! Lex as a reluctant ally and good guy in a Supersuit, Jonathan Kent maybe as a “Superboy”, a mysterious new “normal” Clark and most intriguingly, a shadowy robed figure over seeing all from a distance intimating that this is all part of his master plan. When a minion arrives awaiting orders it has a feel of a certain Sith Lord and his apprentice and as the final page of issue 961 suggests … “There’s something bigger at play”. 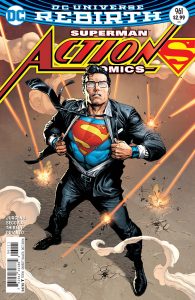 As with Justice League, where the big story seemed like just another B-I-G story, my first impression was this title is going the same way recycling the usual ideas, characters and conventions. A couple of issues later however, and the direction that Action Comics looks to be heading now is fascinating. Who is behind all this carnage? Is he the one who unleashed or controls Doomsday? Is he on our side or against us? What is the bigger picture we aren’t seeing just yet? (Us DC fans have of course, been promised a “bigger picture” to end all “bigger pictures” but when that comes to fruition … well who knows). Over the course of the last five issues we’ve been drip fed these scraps and now it’s all coming to a head and I’m in for this ride. Great stuff. Marv Gadgie