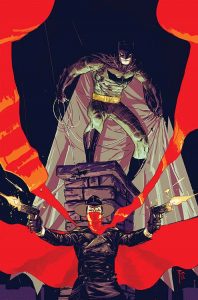 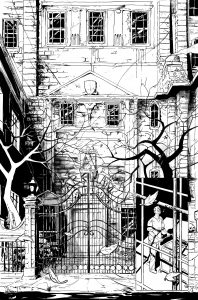 A new mystery begins this April as DC Entertainment, Condé Nast and Dynamite Entertainment unite Batman and The Shadow for an epic crossover. This team-up of history’s most well known vigilantes will send Batman on a quest to unlock the enigma surrounding the obscure Shadow. Writers Scott Snyder (BATMAN, ALL-STAR BATMAN) and Steve Orlando (MIDNIGHTER AND APOLLO, JUSTICE LEAGUE OF AMERICA) along with artist Riley Rossmo (BATMAN, CONSTANTINE: THE HELLBLAZER) introduce a new miniseries full of suspense, action and deadly intrigue.

“Batman is a myth that transcends the comic book page and inspires us to achieve, while The Shadow is the cornerstone of so much of the pop culture and comics we see today,” explains Orlando. “To bring together the World’s Greatest Detective and the World’s Greatest Mystery is an honor. BATMAN/THE SHADOW will pay tribute to legacies in comics and pulp fiction, as the two characters meet in a generations-deep conflict unlike any they’ve seen before, with a case that stretches back to the origins of time, and will redefine murder.”

In the six issue miniseries, murder has come to Gotham. Gotham’s protector, Batman, discovers a trail of evidence that leads to a suspect by the name of Lamont Cranston. The only problem is—Cranston has been dead for over fifty years! As Batman attempts to unravel the enigma surrounding Cranston’s life, the mysterious Shadow will do everything in his power to stop him from learning too much. 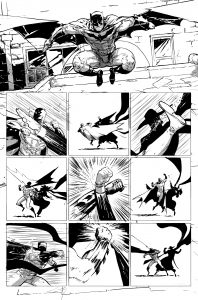 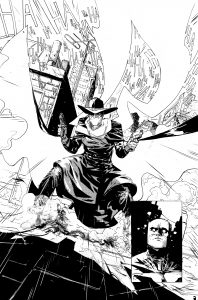 “This crossover, uniting Batman and The Shadow once again, is something we’re very enthusiastic about,” says DC Senior Vice President of Editorial Strategy & Administration Hank Kanalz. “Batman has crossed paths with some of the most legendary characters in entertainment, engaging fans from across the comics universe. The best stories delve into the core of our characters—they explore what makes them heroes. Scott Snyder, Steve Orlando and Riley Rossmo bring their unbelievable level of talent to this series that pays tribute to these characters and their incredible legacies.”

“The Shadow and Batman are two of the longest tenured pop culture icons so it’s a perfect fit for them to join forces,” said Cathy Hoffman Glosser, Senior Vice President of Licensing for Condé Nast. “Bringing The Shadow and Batman together in Gotham is thrilling and fans will be pleased with what is in store for them.”

“Both DC and Dynamite publish the most iconic characters in comics today, and few are as recognizable as The Shadow and Batman,” states Dynamite CEO/Publisher Nick Barrucci. “In speaking with DC about potential ventures, we both recognized that Batman and The Shadow had one of the most beloved meetings in comics, yet while brief, have remained fan favorites for many years. The time was right for the hero who recognizes that ‘villains are a superstitious, cowardly lot’ to again meet the man ‘who knows what evil lurks in the hearts of men.’ We’re extremely fortunate to be launching this series with one of my favorite writers in the industry today, Scott Snyder, and one of the hottest up-and-coming writers in the industry, Steve Orlando. The art from Riley Rossmo complements the story so well. Working hand in hand with DC and Condé Nast, the creative team placed together is incredible and I can’t express how excited I am for fans to see this touchstone series.”

A return to the detective stories of the past, BATMAN/THE SHADOW #1 from Snyder, Orlando and Rossmo will debut April 26, 2017.