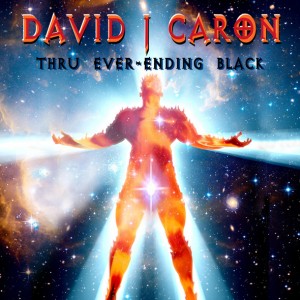 David J. Caron – Thru Ever-­Ending Black 2CD (Casket Music, PHD)
The foundation of a rock or metal band stands or falls with the bass and drums. As good as David J. Caron is vocally and melodically, on the whole it lacks that power, and most songs are carried by that same, rather monotonous rhythm. It’s actually in the nature of a release like this as all instruments are being played by David. Yes, as odd as it might seem, when hearing the orchestral sounds, this is a one man project. Granted – he’s a great singer, a better-than-­average guitar player, and an amazing lyricist, who touches all angles of science and sci-­fi. Also the artwork is great and definitely ties in with the music and words. Above all all 27 (!) songs manage to maintain that same high level. Whether they are all hits remains to be seen. I hope if David J. Caron is going to hit the stage at some point, he’s ready to share the spotlight with a great backing band. With that, he is sure to become a melodic metal-force to be reckoned with. Martijn Welzen

Music
One comment to “David J. Caron – Thru Ever-­Ending Black”