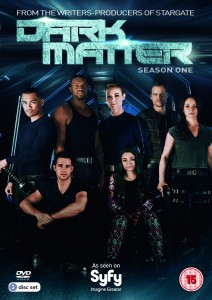 Dark Matter: Season One (RLJ Entertainment)
George Orwell’s famous observation regarding the equality of the animal kingdom is also, it may surprise you to know, true of television shows, especially genre shows; and none more so than Science Fiction. Fandom can be a brutal, unfeeling mistress and knowing that, the folks who produce the shows know that they have to grab their audience from the word ‘Go’, give them a reason to tune in, turn on and never drop out of the viewing figures. And it isn’t easy to produce the kind of intelligent, character driven, action fuelled drama that Sci-Fi fans will take to heart, and it’s even harder to keep the show’s momentum going and hold on to your audience for every single episode of the show’s run. Believe it or not, Sci-Fi fans are an especially, and incredibly hard bunch of folks to please. I know this because I’m one of them. So, if I’m going to sit down and watch an entire season of a show in one (or maybe two, depending on the caffeine situation and supply) sitting, it better have hooked its claws into my cerebellum the second the opening credits of the pilot finish and dug them in a little further with each and every episode. It needs to give me a reason, or even reasons, to keep watching, and boys and girls, ‘Dark Matter’ gave me so me so many reasons to stay glued to the boob-tube that I couldn’t even begin to start listing them. This is the kind of well thought out, intricately detailed, perfectly executed show that starts my pulse pounding and my mind racing; and I loved every single second of it.

We open on a space-ship (The Raza) in which all six members of the crew – and the android -gradually emerge from stasis with no idea who they are or what they’re doing on-board. Turns out they’ve all had their memories wiped and are living in a future controlled by corporations and companies, in which no-one’s life is their own, especially the crew of The Raza. What follows is a furious, fast paced show in which the crew gradually discover who they used to be, why they were on the ship and decide to follow a vastly different path to the one they were sent on by their corporate paymasters and bosses. It’s a show filled with constant deception, treachery and betrayal in which no-one and nothing is who, or what, they seem to be. It draws you in, makes you invest your time in these people and then blows you away with its seemingly unlimited supply of surprises and “Whoa-didn’t-see-that-coming” reveals, each one tying into another while setting yet another plot arc in play. Imagine ‘Blake’s 7’ if it had been written by Philip K. Dick at the height of his powers and had then been brought to life on screen by Joss Whedon, and you’ll have a pretty good idea of the kind of ride you’re in for the minute you press play and let the first episode wash over, and submerge you. You don’t need, or want, me to share any of the interlocking stories with you, because I don’t do spoilers and you’ll be happier not knowing. You really will. Trust me, you need to experience it yourself and I don’t want to ruin a solitary moment of this wonderful show for you. Watch it, enjoy it and watch it again. It’s time to turn to the dark side… Tim Mass Movement