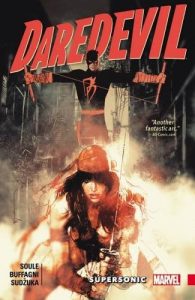 Having witnessed his popularity rise beyond all expectation and with his stock still in its ascendancy thanks to two unflinching and incredibly (and rightly so) well received series on Netflix,  Daredevil is currently sitting on top of the Marvel mountain as the recognised face, and mainstream personification, of “street level” superheroes. Regardless of the character’s history and mythology, something I know a little of since becoming a fan of his particular brand of justice during Frank Miller’s run on the title; and despite the fact that he has faced his own share – and then some- of world ending troubles and enemies, he was, is and always will be the Defender of Hell’s Kitchen.  And Charles Soule, in this the most recent series of Daredevil, has taken him back to his roots, and suited and booted in black and with a new partner in training on his side, Matt Murdoch has returned to the streets that he called home for so long.

Supersonic, which collects Daredevil Annual #1 and issues six through nine of Soules ongoing run, finds Daredevil clashing with a returning Elektra, who convinced that her former ally has betrayed her,  wants answers and the pound of flesh that she thinks she’s owed.  While the story hurtles by in a blur of action and exposition, and ends on a more than satisfactory note, this latest encounter with Elektra is, I suspect, far from over and feels like it’s the initial set-up for a future story. Then before he can lick his wounds, Matt is off to Macau in pursuit of a mysterious briefcase in a cloak and dagger style espionage tale in which he’s given a little assistance by his old ally Spider-Man. But the further into the quagmire of tracking down the case they get, the more Spidey begins to realise that something is amiss with his old chum, which in turn opens a whole can of worms that Daredevil was hoping to avoid. The gritty, noir feel that permeates the stories is brought into dark and detailed being by the combined talents of Buffagni and Sudzuka and it’s their artwork that, paired with Soule’s plot(s), makes Supersonic feel like a tried, trusted and true Daredevil book. Then there’s the annual which throws a couple of quicker, one shot style stories into the mix in which Klaw tries to…well, claw his way back into reality and grief transforms a good man into everything he once despised, both of which close this chapter in Dardevil’s story in snappy style.  Hell’s Kitchen is in good hands… Tim Cundle