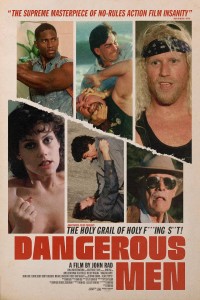 After Mina’s fiance is murdered in front of her, she decides to try to clean up the streets of men that would prey on women. At the same time the brother of Mina’s fiance is searching for clues to the bikers that killed his brother.

Taking place over two decades, surprisingly the two main characters never cross paths despite their connection, making the film more like two running in parallel. Mina’s storyline felt somewhat overblown to me, largely due to inconsistencies in her emotions and fortitude. Though I will give her points for hiding a steak knife in her butt crack before her first kill, and the entertaining way she dispatched her second, a family man who she made strip naked and abandoned in the desert. Left in this predicament he berates his penis for getting him into this mess while trying to come up with scenarios to explain himself should he be rescued.

Elsewhere in the film there are more than a few inexplicable inclusions such as guns that have no muzzle flash when fired, or dead expressions from the actors when something bad happens, a bar that opens out onto a cliff overlooking a beach with no way to it and an impromptu two minute long belly dance.

Whilst not my cup of tea – I felt characters were introduced out of nowhere before disappearing just as suddenly – Dangerous Men is destined to become a cult classic. In line with other such films that may leave me cold, I’m well aware that the right audience will undoubtedly become utterly enamored by its absurdity. For me though, definitely one to be reserved for a night in with lots of friends and plenty of booze. Jason Bonton