Warning: preg_match() expects parameter 2 to be string, object given in /var/www/vip4/sites/vip6102689/httpd/htdocs/wp-includes/formatting.php on line 4866
 Dandridge: Return of the Chap - Mass Movement
x
Spread the love 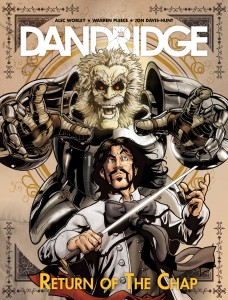 Ahhh 2000 A.D. When I were a lad, every Sunday my parents would take me to my grand parents house to spend the afternoon.  Appreciating that an afternoon with old people wasn’t the most exciting of propositions for young ‘un like myself my lovely gran would furnish me with a selection of comics to while away the day. After all, back then there were only 4 television channels to choose from!  She’d provide a selection from the Beano, Dandy, Whizzer & Chips and other lesser known gems from arguably the hey-day of British comics such as Monster Fun and Krazy.  She generously provided a copy of 2000 A.D. number 1 (as it had a free frisbee – the fabled Space Spinner!!) and I was instantly hooked.

Of course 2000 A.D. became responsible for some hugely iconic characters and stories – Judge Dredd, Sam Slade and Johnny Alpha the Strontium Dog to name just a few.  Clearly I have a certain nostalgia for the title and many fond memories for all the science fiction wonderment it provided me. I suspect that many have. However, I haven’t really followed it for several years, barring the odd graphic novel here and there, with these mostly being collections of the old stuff I read as a child. So I’m unfamiliar with the new characters and stories that 2000 A.D. still merrily provide.  Which brings us to Dandridge.

Dandridge is a fashion obsessed, Victorian dandy and paranormal investigator in a  lovingly depicted steam punk London, but a steam punk based on the harnessing of primal psychic forces and ectoplasmic energies.  He’s the master of ‘savoir fu’ which utilises the occult geometry of style to hypnotise and fascinate others.  He has Shelly, a man-servant and golem who’s a stalwart fellow that’s extremely capable in a fight. He has a magic coat which can alter its shape, size and colour to anything he can imagine. And Dandridge’s a ghost.

His ethereal energies bound into a semblance of living by his unique attire, Dandridge waltzes through a series of surreal and whimsical adventures ranging from ghost powered robots to infestations of leprechauns; and it has to be said, he does it with style. He prances through (un)life threatening situations with wit and charm with a firm conviction that no matter how dire the straight, everything will be fine. Generally it’s thanks to Shelly, Dandridge’s mute golem man-servant saving the day, but even so there will be time for a nice cup of tea or a quick trip to Saville Rowe to seek out the latest styles.

If there’s any fault to be found with this book is that there’s too much imagination in too few pages! Dandridge operates in a hugely complex world where ghosts are used as entertainment, power sources and the basis of technology, but this concept isn’t really explored or explained. Humans live alongside fairies and angels but this isn’t really explained either.  It’s a problem carried over from the original format as a story presented in bi-weekly chunks doesn’t have the luxury of space to cover detailed information so it can focus on the character and action.  Fortunately, Worley handles both these aspects superbly making Dandridge a lovable rogue despite his (many) character flaws and self-obsession. The art’s excellent too.

I really enjoyed Dandridge’s adventures. It’s good to see that 2000 A.D. is still coming up with the goods after all this time.  Dandridge is a light-hearted and whimsical British hero in the tradition of Jason King and The Avengers TV show, working in a wonderfully imaginative alternate Britain.  There’s even a cameo by Postman Pat.  An excellent job done by all involved and I recommend adding this to your Christmas list. Paul Ferriday