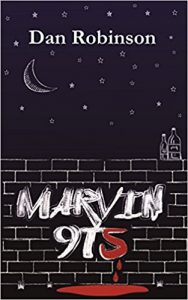 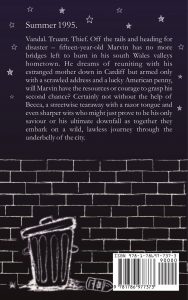 Anyone growing up on a council estate in Cardiff in the 90’s, would find the subject matter Dan Robinson has tackled in his first novel, all too familiar. Harsh lessons-yes. Tough decisions-of course, but there’s plenty of good times to be had too. Mass Movement caught up with first time author Dan, to get the low down.

MM: This is your first novel. How long has Marvin 9T5 been in the works and when did you start writing?

Dan: I’ve dabbled with short stories since my school days but MARVIN 9T5 is my first serious attempt at a substantial work of fiction. I began developing the manuscript around 2007/2008, so not too far off a decade in the works, altogether. Who knew writing a book could be so arduous!? I’ve definitely got a few more wrinkles and a few more grey hairs than when I started out but I’m pleased to say it’s finally here!

MM: Can you give us a bit of background to the story? Where did the inspiration come from?

Dan: MARVIN 9T5 is the story of an isolated, troubled teenager from the south Wales valleys who feels his unruly behaviour ultimately drove his mother to leave home. He tracks her down to Cardiff in an effort to rebuild his family but ends up on the streets, immersed in an underworld full of unsavoury characters, forced to make tough decisions which teach him valuable lessons about love, friendship and life.

As someone who grew up on a council estate in the nineties, the novel is my conscious attempt to re-humanise working-class people and give an authentic portrayal of the struggles and situations we face. Perhaps I’m more sensitive to it because it’s something that affects me directly, but it seems that social class is one of the few remaining areas where prejudice is shown openly in society, without embarrassment or censure. From the “chav” epidemic to the austerity drive to the backlash over Brexit, disdain for “common” people seems pervasive, and that troubles me.

In more general terms of theme, the novel deals with issues of guilt and redemption, second chances to make things right and the realisation that this isn’t always possible. This is a deeply personal book for me, drawing on my feelings about the death of my first serious girlfriend many years ago, and is a way of exorcising a lot of the guilt and grief which continues to haunt me. So yeah, quite deep stuff but MARVIN 9T5 isn’t a dreary read – there’s grim subject matter but constantly counteracted by good humour, by hope and by good people. Just like real life, I suppose.

MM: The book deals with some very real issues faced by some people every day. Were any of the characters in the story based on people you’ve come across?

Dan: Realness is central to MARVIN 9T5 – I wanted it to be authentic, a book that doesn’t sugar-coat or pull any punches when dealing with heavy issues like substance abuse, homelessness and physical/sexual abuse but also in its approach to friendship, fun, sex and love. Like all writers, my work has been shaped by my life experiences to a certain extent but it’s important to state that this is entirely a work of fiction, with regards to both characters and events. I can’t afford any lawsuits on my salary! I think anyone who grew up on a council estate will probably recognise a few of these characters, and as long as they resonate with the reader, they’ll be real enough.

MM: The story is largely based in Cardiff in 1995. What made you choose that particular place and time period?

Dan: Simple, really – it’s what I know best. Cardiff has changed so much in the last few decades – in terms of population, demographics, economy, attitudes, accents, dialect and so on. Obviously it’s part of the natural order of things to change over time and many of these changes have been positive but there’s still a lingering sadness in the realisation that the grimy post-industrial city I grew up in bears little resemblance to the shiny cultural hub we see today. I just felt it was important to document a little slice of that culture while I still possess a few decent brain cells!

MM: Is there any particular author’s work, you look to for inspiration?

Dan: I get inspiration mainly from the British social realist tradition – whether in literature, film, theatre or music. It’s such an important part of our cultural heritage. People like Alan Sillitoe, Ken Loach, John King, Barry Hines, Alan Clarke, Caroline Aherne and Shane Meadows have all influenced me, to name but a few. Andrea Arnold’s Fish Tank is a masterpiece in my eyes. Irvine Welsh’s Trainspotting would probably be the one standout piece of literature that I always aspire to. My only criticism is that it set the bar too high for everyone else to follow.

MM: Have you got the writing bug then? Are there any plans in the pipeline for more books?

Dan: I wouldn’t say I have the writing bug as such – I’ll never be prolific as I need an emotional investment in something to make it work. I’m not an author who writes stories for the sake of stories – I need to have something to say. I feel like I’ve done that with MARVIN 9T5, although there are a few more things I’d like to get off my chest, so watch this space . . .

MM: If so, will you be revisiting these characters in future books?

Dan: Yeah, I think it’s quite likely a few of the characters will show up in future writing. I always liked that Irvine Welsh-style universe of loosely related characters whose paths cross now and again. There certainly won’t be any sequels though – Marvin’s story is done.

MM: As I mentioned, this is your first book. Do you have any tips for first time writers out there?

Dan: I’m very much a fan of the punk rock DIY ethic – say what you want to say, how you want to say it. Not that you should disregard every bit of advice you get – take it on board, process it, but don’t feel obliged to act on it. At the end of the day, even two or more respected professionals can often offer completely conflicting advice and if you try to please everyone you’ll quickly lose sight of the book you wanted to create in the first place. And related to that – aim to grow a thick skin. Leaving flaming bags of dog shit on the doorstep of everyone who ever criticised your writing is tempting but not really an efficient use of your time, and the novelty wears off after the third or fourth bag anyway . . .

MM: If you could have any 4 people from history over your place for dinner, who would you choose?

Dan: Hmm . . . have to go for some big guns, I reckon. Orwell, Marx, Adam Smith and Stephen Hawking. I’d take them to my mum’s house in Ely and get her to cook us fish finger sandwiches while we watch repeats of Fifteen-to-One on Challenge. We’ll soon see how clever they really are. My main man William G. sorts the men from the boys.

MM: If anyone reading this would like to find out further information on you and Marvin 9T5, where is the best place to find you?

Dan: I’m not massively involved with social media, what with being stuck in the nineties and all, but you can reach me on Twitter @MARVIN_9T5 where I will happily interact with other humans from a safe distance. But if you really want to know more about me, just read MARVIN 9T5 – for better or worse, it’ll tell you all you need to know.

MARVIN 9T5 is available to buy now from Amazon and FeedARead.com