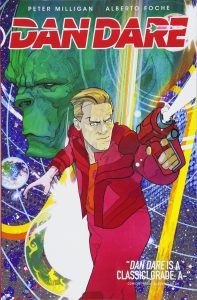 Dan Dare has been a constant in my life for longer than I care to remember. After first stumbling across him in the pages of 2000AD and his flagship position in the relaunched Eagle during the early eighties, through discovering Frank Hampson’s original Dare adventures via the reprinted collected editions, Garth Ennis’ short lived Dynamite Entertainment series and the dashing Colonel’s far more recent B7 Media audio adventures, it feels like Dan Dare has always, in one way or another, been there. I have, since that fateful day that our paths initially crossed, been a fan of the intrepid, space faring defender of the Earth and almost certainly always will be. So when Peter Milligan, a man who’s work I’m also more than little partial too, was given the reigns of, and the space to create and write, a new brace of Dan tales, I was, to coin a Mousetalgic phrase, Peter Pan excited*.  And when He Who Dares Wins, the first collected volume containing issues one through four of Milligan and Foche’s Dare arrived, I became so overwrought that I nearly forgot how to speak and could barely function.

When I finally stopped shaking and eventually managed to calm down enough to actually get on with the task at hand and start reading He Who Dares Wins, I was more than a little surprised, in a good way, to find that rather than trying to reinvent Dare’s mythology, Milligan uses it as a spring board to launch his story. Beginning five years after Dare saved Earth and humanity from the Mekon’s control, He Who Dares is the story of a soldier who finds himself lost in peace time and only begins to understand who he is when faced with a fresh threat of alien invasion, he’s forced to work with his old enemy in order to save everything that he holds dear. Amidst the possibility of annihilation at the hands of an extra-solar Treen force, encountering and fighting alongside strange new allies, battling to save the planet and all the action and adventure that’s part and parcel of the cut and thrust of Dare, Digby and Peabody’s everyday existence, Milligan weaves a tale of adversaries who define themselves via their fractious, yin yang relationship and can only find true meaning and purpose in conflict and the servitude of a cause that’s much bigger than themselves; which in turn, allows them to forget the constant struggles wrought by individuality. Teamed with Forge’s vibrant, almost cartoonish artwork, Milligan’s immediate, enticing, endlessly inventive and eminently readable story adds depth and warmth to, and humanises, Dare and finally allows him to be what he was always meant to be, a man governed by his conscience for whom doing the right thing is the only choice and always outweighs and takes precedence over, any and, all other options. Peter Milligan, Alberto Foche and Colonel Dare, I salute you…  Tim Cundle

*Say it slowly and repeat it over and over until you get it. Which you will. See? It’s all kinds of cool isn’t it? And I’ll bet you’ll start using it and it’ll become part of your everyday lexicon. It happened to me. It’ll happen to you.  Oh, and of you want to know where it comes from, check out Mousetalgia