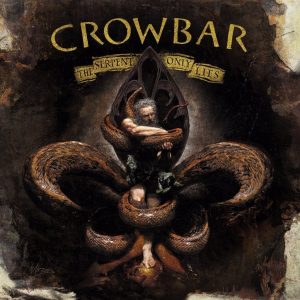 In years past I have not been a fan of underground legends Crowbar. I even saw them live once in my hometown and left during the fourth song. Over the years, people whose opinions I respect constantly lauded this NOLA sludge group and posted links to their songs on a regular basis. When tracks from new album The Serpent Only Lies began to appear I decided to give them a try, understanding that my musical tastes have changed and that a band so highly regarded must be better than I thought. I clicked on the link and listened to the song. Hot damn, I liked it! So I listened to the next track when it was released. I liked that one too! After that I tracked down a promo copy of the entire download. Now, I give my review to you.

The Serpent Only Lies is a strong showing from a band that’s been cranking great metal since the 90s. My only wish is that I had given them a better chance sooner. While I am the Storm is my favorite track on this album, there are no shitty tunes on this most recent release of Crowbar’s. If their previous albums are anywhere near this good, I’ve really been missing out and have years of regrets to atone for. Long live Crowbar! Jim Dodge

Crowbar are THE purveyors of sludge and heavy; and thankfully The Serpent Only Lies takes us right back to the original three or four albums that set them apart from so many to begin with. Slow, heavy riffs, engulfed with hardcore passages make Crowbar’s sound instantly addictive and with this return to their roots, songs like Plasmic And Pure would sit comfortably amongst their classic self-titled release.  For that matter, so would many of the other nine tunes, although the crushing brutality of Broken Glass can be heard here throughout this, their eleventh release. Crowbar have returned to top form and a fire has ignited within Kirk Windstein and making him dig deep for this. Maybe it’s the (welcomed) return of Todd Strange on bass…? Who knows, but whatever it is The Serpent Only Lies places Crowbar right back where they belong.  Mark Freebase