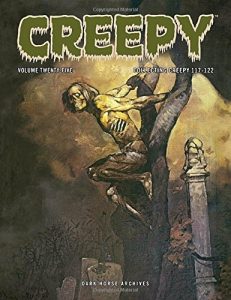 “…She was also called Sugarplum, a nick-name given her by virile townsmen, who had tasted her fruit and found it sweet…”

Ye gods, they got my juices flowing, lines like that, back when I were a lad. And as those juices flowed I’d wonder what, this time, ‘Sugarplum’ would turn out to be. Vengeful witch? Five thousand year old mummy? Some sex-mad succubus? Oh-ho, yes, sex-mad succubi … I particularly liked those.

But, in this case, Sugarplum was the victim. It was the cop with the multiple-personality and penchant for hosiery, high-heels and homicide who was the problem.

That was the thing with Creepy – you never knew what you were going to get. Sometimes the monsters were human. The far-future or dark, medieval fantasy one minute, drug-crazed psychopath or seedy underbelly of America the next. It’s true sometimes the standard could vary, but with Jim Warren’s commitment to quality writers and artists – “I’ll pay you well so long as you give me your best” – that was exception rather than rule, and the fact this EC-inspired forbidden fruit could be plucked from a Thorpe & Porter spinner along with the latest Jimmy Olsen meant that all of it was a – no, I’m not going to say guilty – treat. Higher Openshaw had never seen the like.

So it was, as my review copy of The Creepy Archives Volume 25 was slipped through my door by a suspiciously hairy hand, juices began flowing once more – though, naturally, at my age, this had nothing to do with the succubi thing. Cough. Truth is, I’d sold my what was then complete run of Creepy in about ‘78 – fourteen years into its lifespan and some five before its demise – so the six issues collected herein – 1980’s 117 through 122 – meant I was about to revisit an old friend I’d never seen before.

But I got side-tracked. Vampirella’s fault. Aurora’s Vampirella, that is. Ignoramus that I am, I hadn’t realised these collections were not simply collected strips but whole issues, with full-colour covers, letter pages, et al – effectively, bound volumes on superior  stock – and it took me a while to get beyond the ads for Vampirella and the Amazing Ten-Foot Balloons. When I did, well, probably fair to say that at this point Creepy was creeping past its prime, but nonetheless good stuff remains, even if quality writing and artwork occasionally fail to cohere. Rueben Yandoc’s panels on ‘Black Rainbow’ are stunning, for example, the tale itself less so. Conversely, Bob Toomey’s script for ‘The Watcher!’ – an appropriately placed if somehow anachronistic side-swipe at Fred Wertham – pales a little when teamed with Leo Duranona’s art. But some do mesh, and very finely indeed – Boudreau and Infantino’s ‘A Taste For Heroes’, Lewis and Mayerik’s ‘Winterbeast’, Wein and Blasquez’s ‘Epitaph’, among a good few others. Still, too many tales come across merely as vignettes, ideas go nowhere, a fair number of punch-lines fail to hit the mark, and there’s a vague sense that the magazine – and this Archive Collection – is developing a slight limp that will persist and  worsen until its final incarnation. It’s an impression not alleviated by a slightly wishy-washy introduction by The Goon’s Eric Powell, who, forced to follow twenty-four preceding intros, seems to be left with little beyond the obvious to say.

So – is Volume 25 worth the $50 price of admission? Yes. Because it is a very handsome tome, a glossy grimoire indeed. But it’s worth noting that, with some careful exploration of the market, at this time in the magazine’s life, you’d likely be able to pick up all the originals for not much more than the same. Eerie, eh? Mike Wild