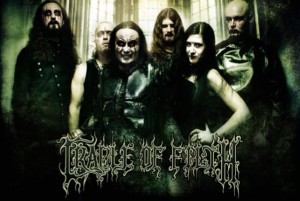 Having worked with the band for several years in the United States, it is with great pleasure that Nuclear Blast Records can officially announce the worldwide signing of one of the UK’s most visionary, sickening and disturbing outfits: CRADLE OF FILTH.

Iconic vocalist Dani Filth commented: “Nuclear Blast owner Markus Staiger has been trying to snare the band ever since I flew over to see him way back in 1996 as a viable label option, after we left Cacophonous records. He barely missed out due to the close proximity to the band of Music For Nations, the label that CRADLE stayed with until 2001. Now, not only do Nuclear Blast have offices all over the world, but the one in London is actually dead opposite to the old MFN building! Which is weird!

For the full frontal assault we have planned for the awesome new album, Nuclear Blast are the perfect war stallion to carry us screaming into the heart of the next chapter of COF’s dark, enigmatic history. Next year is going to be a massive year for the band and the black flags start flying here, with the announcement of our unholy union with Nuclear Blast who have already done great things with my Witch County band, DEVILMENT.”

CRADLE OF FILTH have just returned from their successful run through Russia and will hit the studio to begin recording the successor of 2012’s The Manticore And Other Horrors later this month.