Warning: preg_match() expects parameter 2 to be string, object given in /var/www/vip4/sites/vip6102689/httpd/htdocs/wp-includes/formatting.php on line 4866
 Cradle of Filth – Hammer of the Witches - Mass Movement
x
Spread the love 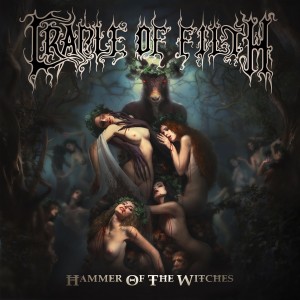 Cradle of Filth – Hammer of the Witches (Nuclear Blast)
After more than two decades of pushing musical and metal envelopes, nobody would blame Cradle of Filth if they decided to slow things down a tad and adopt a gentler, more sedate approach to life. But that isn’t their way, never has been, never will, as Dani Filth and his cohorts delight in subverting expectation, tearing down tradition and doing things the only way they know. Their way. And ‘Hammer of the Witches’ is the embodiment of that singular, uncompromising drive; a blistering assault that’s made up of divinity and ferocity in equal measure, full of breath-taking musicianship, breakneck energy and stark beauty. Resting somewhere between ‘Midian’ and ‘The Manticore and Other Horrors’, possessing the same type of intricate, immediate and insanely catchy songs that made the former a masterpiece and the ridiculously hard one-two knockout power of the latter, ‘Hammer of the Witches’ is Cradle at their finest, a dark odyssey that ventures down forbidden avenues of depravity and destruction before emerging unscathed, unbroken and untarnished at the end of its twisted journey. Sublime, absolutely sublime… Tim Mass Movement