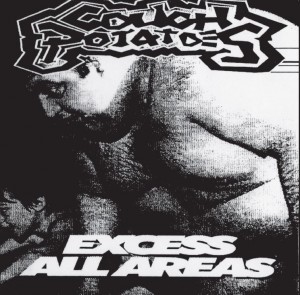 Originally recorded in 1992 but never released, Boss Tuneage have seen fit to finally lift these recordings from the vaults and give them the proper treatment. I don’t think I ever saw these guys live and although their 1995 album “Outweighed” will have passed through my hands at least once, I can’t recall ever giving these a proper listen. Anyway back to 1992, and this is very much a recording of its time. Pop-punk had not hit the mainstream, although bands like Big Drill Car, Doughboys and ALL were doing the rounds and influencing the likes of Green Day and indeed Kent’s Couch Potatoes. You can tell that these guys were on the ball and they have picked out the intricacies of the likes of ALL, dropping in catchy guitar hooks all over the place, in fact the verse  guitar melody to “Kill It” is very close to ALL’s “Skin Deep”. Not that I’m complaining mind you, I love that song. The vocals aren’t as strong as the aforementioned band’s, singer Yan lacks the power and charisma of the popular bands of the day. Still it’s a worthy dip into the history books and another piece of the UK underground punk and hardcore puzzle. Tom Chapman