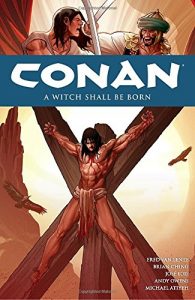 There are few literary heroes who have stood the test of time as well as Conan. His adventures have captured the imaginations of each and every generation since he first appeared in the pages of Weird Tales in the early nineteen thirties.  Created by Robert E. Howard, the writer often credited as the “Godfather of Sword and Sorcery”, Conan was, a freebooter, a reaver, a pirate, a mercenary and a “self-made man” who became a king and almost certainly forged the mold for what would later become known as the “anti-hero”.  Conan is also part of that all too rare breed who have made the successful transition from one medium to another, having become an established figure in both the cinematic and comic universes.  In fact, it’s in the latter where Conan has, arguably, made his greatest mark, and the latest guardian of his four colour legend, Fred Van Lente, continues his tale with savage gusto and gloriously violent aplomb in A Witch Shall Be Born.

Adopting elements of The Man in the Iron Mask, Van Lente’s story is about sibling rivalry, the jealousies and furies it invokes and the misery and misfortune it invariably brings to all of those who are reluctantly caught in its web.  A Witch Shall Be Born is the tale of an abandoned daughter, raised by a sorcerer who returns to enact her vengeance on the sister and the city that she imagines spurned her, of the disaster she reigns down upon the kingdom she comes to rule over and how Conan, humiliated and cast into the desert to die on a cross, returns to reclaim the throne for the deposed monarch and satiate his burning desire for revenge. There is, of course, a lot more to this multi-layered, expertly woven story than that, but to tell you anymore would be to cross over into spoiler territory, and I’m not about to do that. Not even for ten jugs of mead and all the gold in Aquilonia. Suffice to say, Van Lente knows Conan, knows how he thinks and how he reacts to the world that surrounds him, and talking of his world, Van Lente knows that as well. And so does Brian Ching, whose exquisite art brings Conan’s bygone era to incredible, detailed, and gore soaked, life in A Witch Shall Be Born. It’s a book worthy of kings, one of which Robert E. Howard himself would be justifiably proud. Conan’s fate is in good hands… Tim Cundle