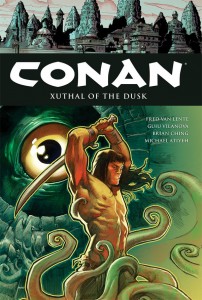 While I’m a big Lovecraft fan, I’ve never read any of Robert Howard’s Conan. I should rephrase that, as I’ve never read any of Howard’s novels about his barbarian creation. I’ve seen the films and I used to read the comics when I was younger, so I know that there are major Lovecraftian influences in his stories. Some stories more than others. Thankfully, this latest volume of Conan’s escapades is one of them and is incredibly Lovecraftian in setting, plot, nature and tone.

Beginning where the previous volume ended, Conan and the recently freed slave Natala are in search of shelter and water when they stumble upon the seemingly deserted city of Xuthal. While it at first seems dead, it is anything but, as a creature stalks it’s (self) drugged sleeping inbahitants, feeding from the shadows. After escaping the beasts clutches, the duo stumble upon a caravan which leads them to a remote oasis holding a tower used to keep an Old One at bay. To compound their growing list of problems, an old acquaintance of Conan, Janissa The Widowmaker, also dwells there and ambushes any trespassers who hold slaves.

I have to praise writer Fred Van Lente for making me want to keep on reading his take on the adventures of the Cimmerian barbarian. Not only does Van Lette know how to keep the story flowing from one adventure to the next, but he also knows how to bring the monstrous side of Howard’s stories to life in grand fashion. Though I wish the fights with the monsters were longer, I know the stories aren’t just about swordplay as Conan, being a wily sort, uses his wits and surprising intellect as well as his prowess in battle, to deal with and combat his problems. The art also plays a major part in these tales, Guiu Vilanova and especially Brian Ching give fantastic form and substance to the stories about the brutal world that Conan inhabits. The only real drawback to Xuthal of the Dusk is that it’s an ongoing series, flowing form one chapter to the next assuming that the reader has some knowledge of previous events. It’s a minor quibble though, as it doesn’t really detract from the enjoyment and pleasure that pours from these well written and illustrated adventures of a man seeking his destiny while dealing with the multitude of problems that constantly surround him. Jason Bonton