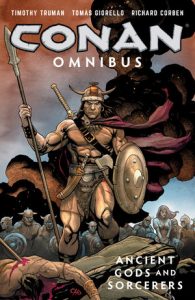 Conan, everyone’s favourite barbarian swashbuckler, is back by Crom! This latest omnibus edition from Dark Horse features reprints of issues #47 – #50 of their Conan series as well as issues #0 – #13 of their Conan the Cimmerian series.  That’s a lot of mighty thewed barbarian action right there.

For those of you unaware of Conan, he was created by Robert E. Howard in 1932 and practically invented the sword and sorcery genre all by himself.  During his fictional life he’s been everything from a slave to a king, a soldier, a mercenary, a pirate and a thief.  He’s fought against armies, giants and even be-tentacled elder gods with nothing more than his dagger and his axe. He  has taken the heads of innumerable evil sorcerers and corrupt, dishonest princes, rescued countless damsels in distress and survived treachery and deceit from friend and foe alike.  He’s starred in books, comics, films, video games, a television series and even an animated series or two.  He was arguably the reason Arnold Schwarzenegger became so popular in the 80s.  He’s Conan and if you’re unaware of him, you really should be trying harder.

Presented in this volume are an action packed selection of adventures for the barbarian adventurer. The Hand of Nergal (based on an original story outline by Robert E Howard) is an epic tale of evil sorcery, vile Lovecraftian gods and a zombie horde.  There’s a beautiful princess to rescue and skulls to cleave by the dozen with the fate of a kingdom hanging in the balance.  You couldn’t really ask for more.

That’s followed by an adaptation of Howard’s poem Cimmeria, dealing with Conan’s return to his homeland lovingly depicted by Tomas Giorello and Richard Corben. Next a sprawling tale about Conan’s return to his home village featuring him entangled in a web of intricate tribal politics via love, honour and betrayal in the frozen wastes.  There’s also werewolves and demonic huntsmen to contend with as well as flashback sequences dealing with the life and adventures of Conan’s grandfather.  Finally there’s another adaptation of one of Robert E Howard’s originals, Black Colossus. This brings Conan into conflict with a resurrected sorcerer king and his army of zealot raiders.  Luckily, Conan gets an army of his own although it’s hugely outnumbered.  Once more the fate of a kingdom lies in the balance but victory for Conan will also win him the love of a princess and the favour of the gods themselves.

This omnibus edition has 400 plus story pages jammed full of classic skull-splitting, sword and sorcery.  Writer Timothy Truman has done an excellent job of adapting the classic stories of Robert E Howard to the comics medium and his own stories are of top quality as well.  Even the obligatory cover gallery is a welcome addition, each image in keeping with the classic Frank Frazetta depictions of old.  Another excellent collection from Dark Horse, worthy of your shelf space. Paul Ferriday