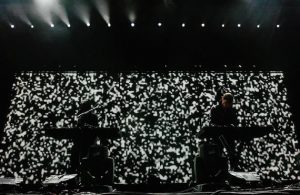 Cold Cave has announced a new two-song 7 inch, titled The Idea of Love, which will be released September 9th on Heartworm.  The eponymous A-side track is premiering today in music video form (directed by Amy Lee), courtesy of Post-Punk.com.
“The veils are thinner than ever on the latest Cold Cave single. Tracing the lines of your palm, telling you what’s to come while reminding you of the sounds that led you here in the first place. The dreamlands you first arrive to may be a nightmare after all. Leather jackets, narrow red lit hallways and strangers hands lead you down. Forever. Waking up in a foreign room with the windows blacked out. Implog, Chrome, Metal Urbain stick out of the records that litter the floor. There’s a Genet paperback on the nightstand resting with a bottle of wine and an ashtray overflowing with lipstick stained filters. ‘Hiroshima Mon Amour’ plays on the TV and you suddenly realize there’s a mannequin sleeping besides you.
The restless energy of Cremations lingers around like an old ghost you can’t kick while you nervously wait for the sun to rise. Falling in love while breaking hearts in the same moment.” (Max G. Morton)
The Idea of Love is a two-song picture disc (limited to 500 copies) and features the song of the same name along with new track “Rue the Day” on Side B.  Pre-order now directly from Heartworm and see Cold Cave on tour this month with TR/ST:
COLD CAVE, ON TOUR:
9/08  SAN DIEGO – MUSIC BOX
9/09 SAN FRANCISCO – MEZZANINE
9/10 PORTLAND – WONDER BALLROOM
9/11 SEATTLE – NEUMOS
9/14 CHICAGO – METRO
9/16  NEW YORK – WEBSTER HALL
9/17 BOSTON – THE MIDDLE EAST
* all co-headline with TR/ST
Photo by Yousef Hatlani