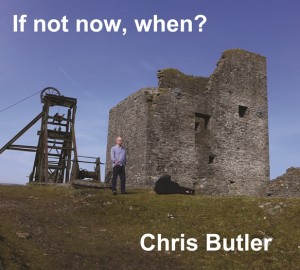 Chris Butler – If Not Now, When?

Chris Butler – If Not Now, When? (Feline Classics)
After seeing the cover and reading the inner sleeve where there is a statement on anti government issues, I expected something along the lines of Billy Bragg but I was wrong. Even if the sentiments are similar, this protest folk singer is a little more subtle in his approach. The singing is quite gentle with a message which does make you listen. I don’t know if Mr Butler is a Johnny Cash fan but there is a definite tinge of the ‘man in black’ with his guitar playing which reminds me of “Jackson” by Cash especially. There are 14 tracks on the album, which all have their own subject and great titles like “Grandpa Still Hates The Tories” and my favourite song title “The Worst Teeth In Showbiz!” Chris played all the songs live, with no overdubs and you can sometimes hear a nervousness in his voice but that doesn’t detract from the listening. You can tell that some of the songs are personal experiences, or direct observations and he even throws in a cover of Chumbawamba’s “Fitzwilliam” for your listening pleasure.. which sounds like it could have been written by him. There is one song that makes me chuckle “Let’s Misbehave” because he sings it in such a polite manner it’s more of him asking you please, to misbehave. If you’re in an easy listening mood but still want to stay an anarchist then give this a go you’ll be glad that you did. Next I think Chris should do a Chumba’s covers acoustic album, altogether now, “I get knocked down…..
Best line? “Got a shock and a doc martin boot right up its arse” from “The Seagull And The Skinhead”. Paul Hoddy