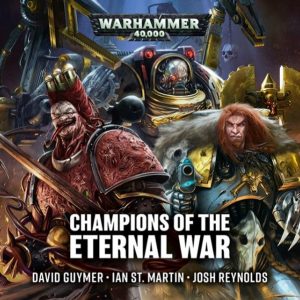 The Calculus of Battle

Champions Of the Eternal War is an anthology collecting three short stories by a trio of Black Library authors that I was not previously familiar with. I dived straight into David Guymer’s The Calculus Of Battle. This one focuses of The Iron Hands Legion and I expected it to be heavy on the tech details. Indeed all that talk of glittering data streams made me think of the Star Trek sexy fan fiction that you lot like. True to form the Iron Hands characteristic cold logic and strategy is fully emphasized as they weigh up the price of victory vs the cost of human lives.

It makes for a bit of a distant listen if I’m being honest. Chapters like the Iron Hands and their opposite number the Iron Warriors are a tough pitch for those of us who thrive on clever dialogue and the nuances of human interaction. ‘The flesh is weak’ ‘No one walks into punishment like an Iron Hand’. It’s not an unfair observation to say that none of these lads are up for much of a laugh

Some of the action movie style tough guy dialogue is corny as hell and I definitely rolled my eyes a few times but Guymers been given the difficult task of finding character in a legion that is distinguished by its distinct lack of humanity and he gives it the old college try albeit with mixed success.

It’s not made any easier given the ‘baddies’ in this instance are Tyrannids, hardly the most characterful of villains to bounce off. Guymer has a good swing at it but I really struggled to engage with this one.

The Embrace of Pain

If recollection serves me right, this story the Embrace Of Pain was originally included as part of last years Black Library Advent Calendar. Regardless its inclusion in this collection is a complete contrast to the calculating brutality of the previous tale.

When the Geller field of the Emperors Children starship Diadem is breached by a chaos spore, it falls upon the ships master, legendary dickhead Lucius the Eternal to square up to the challenge thrown down before him. Not famous for his humility and never one to shy away when an opportunity for a tear up presents itself, Lucius sets out to vanquish his foe and silence the dissenting voices within his own legion. But will his ambition prove to be his undoing?

Plot wise The Embrace Of Pain is nowt to shout about. It is a fairly simple premise but Ian St Martin writes with such manic enthusiasm that it’s difficult not to enjoy yourself. Maybe it was the dubious tuna sandwich I had devoured prior to my listening but the squirming Lovecraftian descriptions of the chaos spore slipping through the Geller field and infesting the starship with its fetid touch made me feel a touch peculiar.

Star of the show is obviously Lucius, surely one of the most immediately recognizable characters to emerge from the dramatis personae of the sprawling Horus Heresy. And his appearance here is exactly as I had come to imagine him, a preening, arrogant and altogether lethal champion of Chaos. Some quality voice acting courtesy of Luis Soto succeeds in bringing Lucius’s conceited Tory boy drawl to life and at times I very much wanted to smash his face in myself. The Embrace Of Pain is an entertaining if all too brief introduction to Lucius and leaves me wanting to hear more.

The Art of Provocation

Finally we arrive at Josh Reynolds tale of the Space Wolves The Art Of Provocation. Look, maybe I am a touch biased in reviewing this short story since play the Vlka Fenryka when I have the time and inclination. Even more so I have a deep and abiding affection for the Art Of Provocations protagonist, The Rout’s resident wind up merchant Lukas The Trickster.

Veteran Space Wolf players may be familiar with this story as it’s based upon some of Lukas’s flavour text from one of the old Space Wolf Codex. Reynolds clearly relishes pitting the Jackalwolf against a forward base occupied by a nest of Orks and indeed his own superiors in The Rout. Needless to say once Lukas gets a hold of the bases voxcaster, hijinks ensue.

Sure The Art Of Provocation is a bit daft and the accents are proper naff but It’s written with enough humour and irreverent spirit that it is a welcome breath of fresh air after the Iron Hands poe-faced war maths and Ian St Martin’s squirming chaos rivalry. Nathan Bean