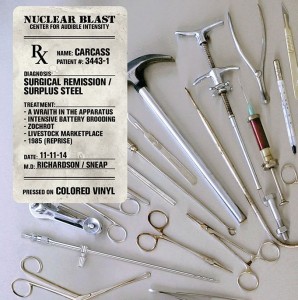 Carcass – Surgical Remission/Surplus Steel CD (Nuclear Blast)
This band has never made a duff record. Not one single bad album. Fact. With ‘Surgical Remission/Surplus Steel’ once again it’s a release that reeks of pure metal putrefaction, even though these days the positioning within grindcore is a lengthy distance Jeff Walker’s vocal snarl is still totally satisfactory. Consisting of rare and unreleased tracks recorded during the ‘Surgical Steel’ sessions the tight fretwork from distinguished guitarist Bill Steer is as sharp as ever and cements the sounds of the band back to a level that so many look up to. New drummer (since the reformation) Daniel Wildings has a real flare for fluent feeling and showcases a natural groove of original precision rather than robotic wooden sounds – a great musical find. The defined stops and starts, the distinct time changes and the technicality are all natural elements in the rhythms of this band, similar skills displayed by their much loved pathology professionals; across all the four tracks present here – five if you are to include the ‘1985 (reprise)’. Carcass’s blend of melodic-death-metal-thrash-grind has a certain pedigree, a certain distinct place in music. Also available in coloured vinyl versions it’s sure to become another collectors piece. Mark Freebase