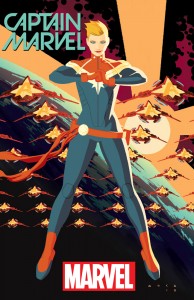 We are thrilled to have Michelle and Tara onboard for Captain Marvels next adventure, says Marvel Director of Character & Content Development and Series Editor Sana Amanat. They are powerhouse storytellers who will take Carol to even further heights as she explores whats beyond Earths borders. Carol Corps, stay at the ready, its going to be one wild ride!

Carols been from one end of the universe to the other, and through her journey shes discovered the hero and the leader she was born to be. Now shes back  and if you want to get to Earth, youve got to get through Captain Marvel first! Thats right, Earths highest flying, hardest punching heroine is the planets first line of defense against any and all extraterrestrial threats. With an entire fleet and a state of the art Space Station at her command, if you come here looking for trouble, you wont know what hit you! But when an abandoned ghost ship appears in our galaxy carrying mysterious cargo  does it spell doom for everything Carols built for herself?

Hero. Pilot. Avenger. Leader. The next evolution of Carol Danvers begins this fall as she blasts off once again in CAPTAIN MARVEL #1!