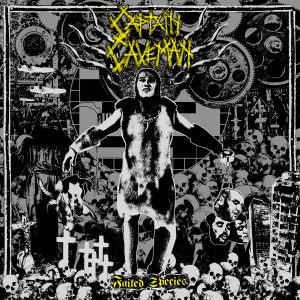 Yeah, I’ll bet that the first thing that went through your head when you clocked the band’s name was the same thing that went through mine. The seventies cartoon in which “Cavey Wavey” rode around with three women and got into all kinds of hilarious and ridiculous scrapes and situations, which were usually resolved when he screamed “Caaaappppptttttaaaaaiiiiinnnnnnn Caaaaaaaaaaaaaaveman” and went nuclear on the bad guy with just his club and Neanderthal anger issues. Well, these chaps sound like the Hardcore equivalent of one of Cavey’s legendary freakouts.  Faster than a show would clear out when GG was in full in full scat attack mode and heavier than the concrete overshoes Jimmy Hoffa wore on his last swimming trip, these blast beat obsessed, grinding madmen sound like they’ve just woken from  a twenty nine year hibernation, as their Scum meets Heresy with the odd bit of Deviated Instinct thrown in for good measure Hardcore would have fuelled many a pit in the late eighties UKHC scene.  They’re a blunt instrument in a precision driven world, but sometimes the only thing that’ll get the job done is a good old fashioned battering ram. All together now, “Caaaaapppppptttaaaaiiinnnn Caaaaaaaveman”… Tim Cundle