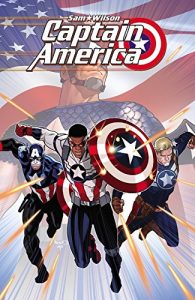 Things move pretty fast in Captain America’s world and if you take your eyes off the prize for even the briefest of moments, you’re more than likely going to be left behind, frantically attempting to chase after the red, white and blue hero as he surges forward and ever onward. I’d only just got used to the fact that Sam had replaced Steve Rogers (after the latter’s super-soldier serum had been deactivated by the Iron Nail) and now Steve Rogers is not only Cap again, but he’s also Hydra’s most valued asset. And Standoff is the story of how Steve not only returned to duty, but also how he became an agent of that most insidious terrorist organisation.  Or rather, it lays the framework for the Hydra tale, while also being a rather involving, intricate and moving story of what it means to wield the shield as Captain America and how fulfilling that role transforms those assume the mantle. Right about now, I guess you’re asking yourself why I’m talking about Steve Rogers when this book bears Sam Wilson’s name. You’re right to ask, and the reason is… Captain America isn’t just about Sam. It isn’t just about Steve either. It’s also about Bucky (and every other individual who has carried the shield into battle) and tells the story of how each of the last three men to have been (and two who continue to be) Captain America react to their discovery of S.H.I.E.L.D.’s dirtiest secret, Pleasant Hill, how each deals with the revelation of the highly illegal and morally questionable super-villain prison’s existence and the often complex and evolving relationships and friendships that tie them together.

In Captain America: Sam Wilson Standoff Sam, Bucky and Steve are plunged into the thick of things as their arrival at Pleasant Hill coincides with a mass revolt and attempted breakout by the inhabitants of the cosmic cube fuelled prison facility.  The myriad of sub-plots involving the Red Skull, Baron Zemo and the quest to control the power at the heart of the gaol are interwoven with the divergent approaches the central characters take to helping shut down the super-powered town and taking down its “citizens”. Coupled with a brace of brief tales celebrating Captain America’s Seventy Fifth Anniversary, Standoff is a fantastically quick, dialogue heavy adventure which fills in all of the blanks from the Avengers event that its spun-off from, while exploring the widely differing, and yet oddly similar, personalities of the trio of heroes who all bore, and those who still bear, the name Captain America. Nick Spencer and the rest of the, let’s face it absolutely huge, creative team responsible for this hugely enjoyable story filled with sublimely detailed and beautiful artwork, have delivered a heartfelt tale about brotherhood and friendship and the way that they’re hardened and forged in the heat of conflict and adversity. Oh, and don’t worry there’s plenty of action as well. And when I say there’s plenty of it, I mean there’s plenty of it and it’s the good stuff too. You know, the jaw dropping, eye popping, all encompassing, adrenaline pumping, fist flying, gung ho style mayhem that you, me and everyone else has come to expect from Captain America. Steve Rogers may well be neck deep in the convoluted world of Hydra, but while Sam Wilson stands watch, Captain America still stands tall. Semper Fi Sam. Semper Fi… Tim Cundle