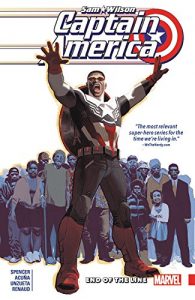 I never thought, following Ed Brubaker’s Death of storyline, that Captain America could break my heart again. In the years since he was gunned down in the aftermath of the first Civil War I’ve watched Steve Rogers, and the men who carried the shield in his absence, flourish and fall as destiny pushed them onward, ever onward down the road leading to Secret Empire. But throughout all of the trials and tribulations of the various Captain Americas I never imagined that I’d ever end up feeling that same way as I did when Steve Rogers bled out on those cold, rain soaked steps; until I read End of the Line. And I never thought, not even in wildest dreams, that the Captain America that would emotionally gut punch me and bring that wave of sadness flooding back would be Sam Wilson. To me he had become the right Cap for the world, the one that it needed to believe in as a symbol of all that was right and true, a street level hero committed to justice and proving that it was an inalienable right of, and for, all men and women while Steve Rogers sat in his ivory tower dealing with extinction level and planet ending events. Sam Wilson was the Captain America the world so desperately needed, it’s just a shame that in End of the Line, the world doesn’t feel the same way about Sam as it shatters his faith both in himself and in everything that he holds dear, and in doing so makes him to turn his back on the shield.

Like Brubaker before him, Nick Spencer understands Captain America on a fundamental, personal and almost intimate level. Spencer also understands all of the facets that character has evolved to encompass in the time since Brubaker was in charge of guiding Cap’s destiny. And Spencer also knows that no matter how much we would like to believe that the society we live in has become a place of acceptance, tolerance and equality, in actuality it hasn’t. In truth it’s cold and harsh and the underlying attitudes of the past still maintain a stranglehold on the mainstream point of view, making the masses scared of change and anything new. End of the Line is a savage and uncompromising reflection of the reality that we actually live in and what it means to be part of a minority in a society that seems to be regressing instead of progressing as it searches for someone to blame for its many ills instead of attempting to actually stand up and fix its problems. This beautifully rendered story of inequality and injustice and a man pushed beyond breaking point, isn’t an easy read, but then I’m sure that Spencer never meant it to be. After all, how can the tale of a man losing his faith in everything that he believed in, ever be an easy thing to read? And that’s exactly what happens in End of the Line, as Sam slowly but surely comes to realise that the system he believed in so totally doesn’t believe in him and it is absolutely heart breaking to watch him undertake that journey, to be humiliated the way he is throughout the book and to come to the realisation that the world just isn’t ready for him to be Captain America and save it from itself. No, it isn’t an easy read, but the best books and stories never are… Tim Cundle