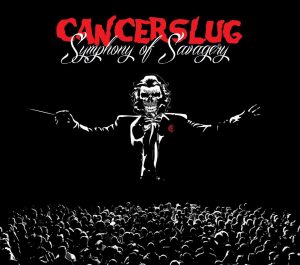 Cancerslug is back with their (supposedly) final album, Symphony of Savagery. As the third part of the Sadist Trilogy which also includes Seasons of Sickness and Sassy for Satan, Symphony…marks the band’s exit from the scene. In true Cancerslug style there are reworked songs from previous releases and new songs that have never been heard by the Slugcult. It’s a formula that has always worked well and allows the fans to experience CS in different ways each time a new album is unleashed. This time we find Alex and the gang heavier than before, even going to a bit of doom on ‘Necrosis’. I hope that this amazing album isn’t truly the end of Cancerslug but even if it is, it promises something new and exciting in the future. Is Symphony of Savagery the best Cancerslug album ever? That debate will rage for as long as there are surviving fans of CS. Slugcult Rise! Jim Dodge