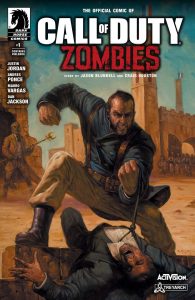 One of the biggest game franchises ever, with a combined worldwide sales figure going into the 200 million mark, it was always going to explore new territories. Call Of Duty is perfect comic book fodder. What started out as, the closest thing you could get to war without being shot, has developed its own storylines  over the years and now has series of offshoots covering all the major World Wars, possible future wars and even zombie outbreaks, which is where the new book comes in. Call Of Duty Zombies 2 #1 is part of a stand-alone story which enables the franchise to advance its zombie storylines even further.

Kicking off in England in 1912 the opening pages give us a glimpse of the horrors to come, through the eyes of an as yet unnamed woman, before we are cast back two years to Morocco where a man named Alistair Rhodes is seeking help from the commander of the French Foreign Legion to find a mysterious artifact, which is of interest to several parties. It’s all very Raiders of the Lost Ark at this point and even Bruno Delacroix  the Foreign Legion Commander is a traditional hard man character in the vein of Pat Roach whilst another character-Mr Lebeau, was surely inspired by Rene Belloq. Now if the name Delacroix seems familiar to you, then that’s because he’s popped up in the Call Of Duty universe before in Black Ops 4: Zombies. Anyway, back to the story, with several people after this artifact the chase is on to find it and see what power it possesses. The action is fast and furious, not taking too much time in forging relationships, which in these sort of books- is a good thing and most of all, I’m pleased to report, there’s plenty of blood and guts.

There are a lot of clear influences here and that’s okay, at least they’ve been influenced by the best and as a casual Call Of Duty fan, I’ve seen enough in issue one to want to see more. So put down your pads gamers and pick this book up because the game can only take you so far-while this book promises so much more. And while the first issue of Zombies 2 is everything it should be and more, in all honestly I’m still waiting for an Operation Wolf spin off… Chris Andrews