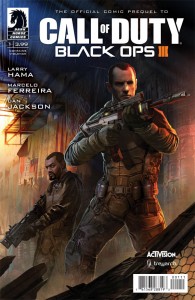 Call Of Duty: Black Ops III #1 – Larry Hama & Marcelo Ferreira (Dark Horse)
With the Christmas season coming up there’s always one game that can be counted on to come out around that time: Call Of Duty. And yes, I’ve played the game series since it came out back in 2003 and have enjoyed it immensely due to both story and game play. But with the companies including multi-player in some games, story and game play for the most part seem to have taken a back seat. Thankfully the game company has found a way around this, and have given us, the readers and game players alike, more information about the game we enjoy so much.

In Call Of Duty: Black Ops III we’re introduced to a new crew who are sebt after a double agent, only to encounter problems throughout the mission and one major one in partocular. A problem that goes by the name Mokrie Baba, the Wet Witch of Lunyanka. As in with all Call Of Duty stories, expect plenty of death for all those involved.

Written by Larry Hama who has a long history of writing military comics, including the original G.I. Joe run at Marvel in the 1980’s (which I read when they first came out), who hasn’t lost his touch when it comes to creating interesting characters. With any and all restrictions, for the most part, removed, Hama enjoys making his cast go through hell before they reach the finish line, although whether any that we’re introduced to in the first issue make it that far is another question entirely. Artist Marcelo Ferreira, who’s been working in the field since 1998, has a style that at first seems out of place with the grittiness of the story, but by the end of the first issue seems like a perfect fit, due in no small part to his more loose and free style. While some of the military jargon will confuse some readers, the first issue is a good start to what could be a very interesting lead up to the game and a decent story in its own right, about a world torn apart by war and those trying to fix it while attempting to survive. Jason Bonton