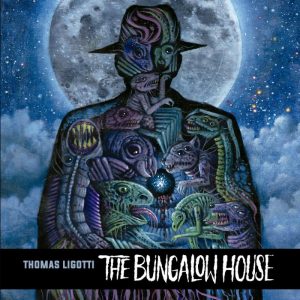 The horror and vinyl spoken arts specialists at Cadbra Records present another new tale of weird fiction, preparing for the release of Thomas Ligotti’s The Bungalow House on deluxe LP. The story is read by Jon Padgett, and the album scored by Chris Bozzone. The label has partnered with the team at Modern Vinyl to issue a pre-release audio sample of the album, as preorders are made available this week.

Modern Vinyl offers with their advance preview of the album’s opening minutes, “The story is ripe for this kind of audio treatment… Padgett’s voice is heavily modulated to mimic the sound of a well-worn cassette tape, while Bozzone layers light guitar and drones to drive the narrative. Cadabra are traditionally well known for their excellent Lovecraft adaptations, but Ligotti’s use of modern dialogue definitely gives them some room to stretch out.”

Cadabra Records will release The Bungalow House in a limited first edition of 500 copies pressed on color 150-gram vinyl and is housed in a deluxe heavyweight tip-on jacket. The record includes a 12-page booklet with an extensive essay by author Matt Cardin, a new interview with author Thomas Ligotti, and a 18″x 24″ promotional poster showcasing the newly commissioned art by Jason Barnett. An early bird package comes with a limited cassette tape with an alternative excerpt of the dream monologue sequence.

The Bungalow House will see release on Friday, May 11th; preorders will go live on Tuesday, January 23rd, at THIS LOCATION