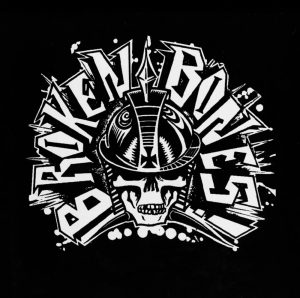 For some people it was GBH, for others it was The Exploited or Discharge, but for me, the quintessential UK punk rock (bordering on Hardcore) band of the eighties was, and will, always be Broken Bones.  Named after a Sounds feature which detailed guitarist Bones’ departure from Discharge, for me they always encapsulated everything that I thought punk rock should be about. They effortlessly combined melody, aggression and energy, wrapping them together in songs that rallied against the world and everything in it. Nobby’s snarling, searing vocals were a perfect fit with Bone’s frantic riffing and jaw dropping solos, Oddy’s (and later Tezz’s) pummelling bass lines and Bazz’s direct, no frills, none needed and none expected, rock solid drumming.  Collecting everything they recorded from their debut EP Decapitated through to F.O.A.D., this is the quintessential Broken Bones collection, contains all of their finest moments and captures the band at the height of their powers. Absolutely essential… Tim Cundle