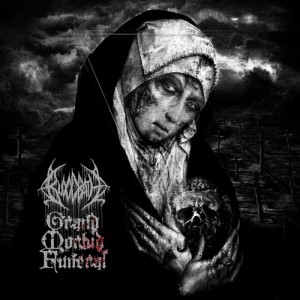 Bloodbath – Grand Morbid Funeral (Peaceville)
While the world outside gets darker due to the shortening of the days AND the world as we know is falling apart, Bloodbath sets one foot through the door. Only one as the other is stuck in a shallow grave and it is through this void between the living and the dead that the unholy sounds of ‘Grand Morbid Funeral’ are allowed to escape. Dark and depressive Swedish style death metal spat in your face by none other than Nick Holmes of Paradise Lost. Holmes fits in amazingly well after Mikael Akerfeldt left. The wheels of the clock of death keep on turning and with every song you are closer to your own demise, and that’s not even figuratively speaking. You have to love what Grave, Dismember and Entombed did in the 80s to truly love and understand this burial, but if you do, you will embrace this tombstone as if it were your own. Martijn Welzen