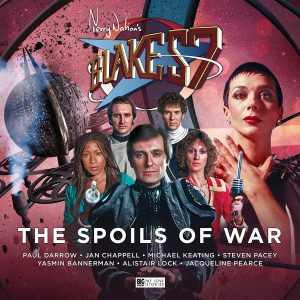 Sing huzzah and do a little dance, because after break of almost two years, Blake’s 7 have returned to Big Finish with a new box set of adventures. Set within the third series of the television show (due in some part, I assume, to the passing of Blake himself –  the mighty Gareth Thomas), this production features, with the exception of Dayna Mellanby, whose role is now being played by Yasmin Bannerman, most of the show’s principal stars. Woooooo!

If you can cast your mind back – or need an update as you’re too young to remember the original televised series, season three dealt with the aftermath of intergalactic war and with the Federation’s Star One control base being destroyed, so this run of stories follows some of the conflicts’ impact on Federation space and handles changes to the show’s line up. Here’s a breakdown of the stories:

We begin by focusing on newcomers Dayna Mellanby and Del Tarrant who have yet to find their place in the Liberator’s crew. Here, each are paired with an old hand; the hot-headed, weapons obsessed Dayna with laidback thief and personal favourite Vila, who tries to show her the ropes, while Cally accompanies Tarrant, leaning on his former Federation credentials to infiltrate a prison in search of the missing Jenna. Meanwhile, Avon (another personal favourite) sits alone on the Liberator and cannot resist weighing up his options in conversation with Orac.

Liberation serves as a good (re)introduction to the characters and features an excellent performance from Sara Powell as the planet’s frustrated and delightfully nasty Captain Rokon, who butts heads with Tarrant before, rather sadly, getting her just deserts.

Vila and Tarrant get some quality time together here, as they follow-up on an offer directed at Blake that seems too good to refuse. Going in pursuit of a Federation data core, offered by desperate technician Shuuna, they find themselves stranded among drug runners and criminal gangs, while the Liberator withdraws to the edge of the system for safety.

The pair aren’t the only respondents and soon enough others arrive – led by an old acquaintance of Vila’s, played hilariously by Tracey Wiles, who has her own agenda and some rather amorous intentions. There is plenty of great character work again here as the mismatched pair try to build a working relationship and, as ever, Michael Keating is absolutely fabulous as Vila, the coward who’s primarily interested in what he can order from the bar, and, of course, his own survival. Did I mention that Vila was a personal favourite of mine…?

During the events of Outpost, the remainder of the crew head for a remote planet, lured in by rumours that Blake may be there. Ostensibly on a mission of mercy, Cally and Avon soon become embroiled in an experiment in which Avon is the test subject. This places Avon into a highly unusual situation which grants him a fresh perspective and allows us some insight into Cally’s unique position on the crew. Charlotte Wilson guests as Imra, a sympathetic and rather nervy scientist who has an ethical dilemma over the consequences of her experiment, while Keith Drinkel plays Kaverin, her throughly amoral boss. I loved this story, but then again, Avon is a personal favourite of mine. Did I mention that?

The final adventure reunites the whole crew with their greatest enemy as Avon pursues a distress call from a damaged space station, only to end up face to face with Servalan (a personal…oh, you get the drift…).

Servalan’s cunning plan to take over the Liberator though spectacular, does have dangerous, potentially universal consequences. Effectively a ‘bottle show’, taking place on board the Liberator and featuring only the regular cast, Solus has a killer premise and offers plenty of great interaction for the cast. I particularly enjoyed hearing Dayna’s frustration at once again being unable to fulfil her promise to kill Servalan, and that the story grants Vila a chance to be heroic.

Across all four stories, every character has an opportunity to shine – and shine they do, which means that there are some charming character moments alongside healthy doses of action. In addition, Alastair Lock plays dual computer roles, as the crabby Orac and imperious Zen, and he complements the principal cast perfectly. The sound design from Nigel Fairs & Luke Pietnik is rather excellent too.

The Spoils of War is, I believe, the first of four box sets from the Big Finish stable, with the following three comprising a wider ‘season’ of stories. As the season progress, one thing I would love to hear are some familiar period voices in the guest cast, as the added joy of a Blake’s 7 episode is seeing someone like Richard Franklin or John Leeson turn up. But no matter what happens or who takes part, I’m hooked again. This set is a great reboot to adventures on the Liberator. Bring on the rest please! Bex Ferriday