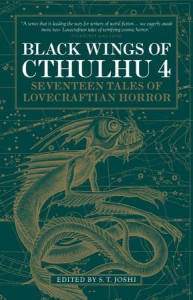 I’ve often wondered how Lovecraft would have felt if he’d known the effect and influence that his work would have on genre fiction, the thousands of authors determined to continue, and ensure the survival of his mythos, and indeed, given the increasing awareness of Cthulhu in mainstream consciousness, popular culture as a whole.  Would he have balked at its intrusion into a world that he shared with his readership and close circle of confidents, or would he have rejoiced, and found a modicum of happiness in knowing that his stories and novels were, and are, beloved by so many? It’s a question that can only be answered by far more learned men and women than me, but I’d like to think that he would have garnered some satisfaction from the knowledge that he helped sow the seeds of cosmic horror and curious terror in the imaginations of so many.

Black Wings of Cthulhu 4 is the latest instalment in the series of short stories contributed by writers who are either fans of, predisposed to enjoy or influenced by Lovecraft’s work, edited by the esteemed S.T. Joshi. While the inclusion of Lovecraft’s pantheon of deities, ancient star beings and the cults that they spawned is limited in this volume, his all-encompassing reach can be felt in each and every one of the included tales. From genuinely disturbing accounts of the consequences of mutilation (Melanie Tam’s Trophy), to the dread filled self-realisation of the implications of discovery (Richard Gavin’s The Rasping Absence) and supernatural and multi-dimensional revenge and punishment (Jason V Brock’s The Dark Sea Within), the weight and importance of the themes and ideas that Lovecraft initiated is omnipresent. However, it’s when the contributors incorporate the Great Old Ones, Elder Gods and things from the beyond that stars, as in Darrell Schweitzer’s A Prism of Darkness, John Pelan and Stephen Mark Rainey’s Contact, Will Murray’s Dark Redeemer and Donald Tyson’s The Wall of Asshur-sin that Black Wings 4 is at its hideous best. It’s in these stories that it reaches its creative zenith and sinks its claws deep into the reader’s imagination, whispering fables and legends, long after the lights have gone out, of the frightful realities that lie just beyond the veil of our understanding.  Embrace this book and let yourself be spirited away by it’s black wings, follow the Lovecraftian path and be transported to realms where the laws of man no longer have any bearing. Ia! Ia! Cthulhu fhtagn … Tim Mass Movement