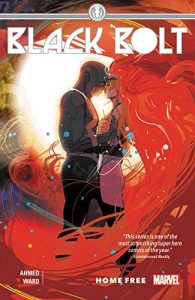 One of the most difficult aspects that many prisoners face after finally being freed from gaol is returning to the life, and home, that was taken from them.  Which is the dilemma that Black Bolt and his new ward, Blinky, face in Home Free, as stripped of his powers and unaware of the hardships and trials that his people have faced since he left them, the former King of the Inhumans returns to Earth. No longer the same man as he was when he left the third rock from Sun, Black Bolt finds that he isn’t the only thing that has changed, as having been accepted again by the citizens of Attilan and having reunited with his son, he and Blinky face their greatest challenge. Telling the wife of their friend and former fellow prisoner, Crusher Creel, that her husband died saving his friends and ended his days as a hero rather than the villain that the rest of the Universe always thought he was.  Death is never an easy burden to carry or share, but in Black Bolt and Blinky’s case it’s made worse by a rogue group of Inhumans and the return of an enemy that they thought was vanquished and a thing of the past. But like the blackest of nights, things are always darkest before the dawn, and Home Free when the dawn eventually arrives, it does so in the shape of a most welcome, and unexpected, ally who helps the King and his ward to, once again, save the day.

Home Free, the second collected volume of Saladin Ahmed’s Black Bolt run and the culmination of his time on the title, rather than being a typical superhero story, is instead a tale of self-discovery, redemption and explores the idea that while the past can shape a person, it’s all too often a prison that prevents those who cling to it from reaching their full potential. It’s a story of letting go and embracing the future, of looking forward instead of backward and of new beginnings forged in the fire of personal adversity and tragedy. That said, there’s also plenty of super-powered heroic action, all of which is given life by the fabulously talented trio of Ward, Irving and Hans whose unique styles help to give Ahmed’s story it’s incredibly individual look. Ahmed’s lyrical prose, attention to detail and gift for creating intriguing characters and crafting snappy, attention grabbing dialogue have ensured that Black Bolt has been one of the most consistent and rewarding books to have emerged in the last year and I’m going to miss his unconventional, rare and thoroughly enjoyable take on royalty.  Recommended…  Tim Cundle