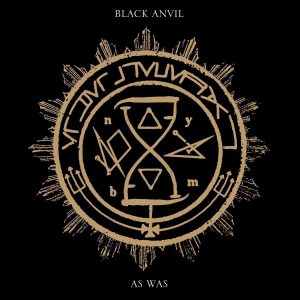 It always blows me away how much good new music there is out there out there, but that makes it impossible to keep on top of things. Case in point – Black Anvil is a band I keep meaning to listen to properly, and yet here we have their fourth album in almost ten years and this is the first time I can give them my full attention! Although the original band members have hardcore roots (having played in the likes of Kill Your Idols, Sheer Terror and Cause For Alarm to mention just a couple), this is a pure metal experience. I was expecting to be pounded with black metal straight and no chaser, but there are many facets to the Black Anvil sound. They have taken core elements of the black metal blueprint – blasting beats, higher-pitched hypnotic guitar riffing, and skin-crawling vocals – and built their own vision of the sound, much as bands like Cradle Of Filth did a generation or two back or even thinking back to how Celtic Frost consistently reinvented their sound, never covering the same ground twice.  The most striking effect for me is how Black Anvil have conjured up a very atmospheric collection of songs. Every time their musical hammer pounds the anvil, a new piece of metal is forged, with ethereal guitar intros and incredible melodic singing linking musical sections together so that even epic length songs seem to fly by. Add some traditional metal into the blender and you have a very diverse album that still waves the black metal banner, but at the same time, is so much more than just that. Tom Chapman

With their fourth album Black Anvil have found deeper shades of black to colour their world. The band said that their previous album Hail Death (2012), took their music to the next level and guess what?  They’ve done it again. Although I’m still not sure, as far as black metal is concerned,  that the next level is actually up, as a downward spiral of anger and hate seems to be more appropriate. The band doesn’t want to progress and are focused on creeping back in time and probably won’t stop until they have reached medival times where human lives did not matter, and war, famine and plagues were the only constants. Having said that, these days we’re plagued by social media, populism and false news, which has led to a global intellectual famine. So for mankind the same question is, are we progressing? Or would we like to have things As Was? Martijn Welzen