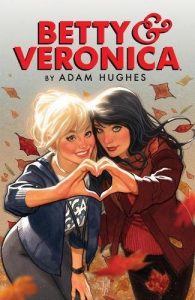 When Betty & Veronica landed in my hands, the first thought which sprung to mind before I had even opened the front cover, ‘Why does the cover design look like something from the mid twentieth century?’

This was answered when I took a closer look at the writer and artist’s other work. Adams Hughes creates exquisite pin up and good girl art, popular amongst comic art collectors and reminiscent of the 1940’s style of All-American sweetheart, wartime propaganda posters. Maybe the idea from that era, that ‘sex sells’ is the reason that a ‘missing’ page which has apparently been eaten by Hotdog (Jugheads dog) has been replaced with a pic of Betty and Veronica in bikini’s filling us in on the plot from the missing pages. The reason for this according to Hotdog being, “In case that was the kind of comic you were expecting.”  The artwork throughout this trade paperback is without a doubt stunning with a naturalistic look, enhanced by the earthy colours and sepia tones used throughout. The whole ambience of the book could have felt ‘of a different era’, the era in which the Archie comics first arrived on the scene, were it not for the inclusion of some more modern-day phenomena such as hipsters who are addicted to coffee, cell phones and taking selfies.

Oh, and that’s another thing, why is this comic collection being narrated by a dog? A very eloquent dog I hasten to add, with an exceptionally sophisticated vocabulary (for a canine). Having Hotdog explain what’s going on is a useful device as the dialogue between the comic’s main human characters, is somewhat limited. In fact, throughout the saga they rarely interact as this storyline is about the two falling out over a difference of opinion on the future of Pop’s Choclit Shoppe. Veronica’s father decides to buy it out and turn it into part of a coffee shop chain, while Betty is anxious for Riverdale not to change…ever! This results in a ‘war’ ensuing between our two protagonists as both attempt to garner support for their cause through whatever means necessary

Betty & Veronica, form two sides of the eternal love triangle (with Archie being the third side) and as such compete for his affection.  However, If I didn’t have previous knowledge of the girls, this collection wouldn’t have given much away as to the full nature of their bond. We had a hint of their characters in the initial conversation between Archie and Jughead when discussing which of the girls would win in a fight and later in Hotdog’s observations based on how these humans smell. I did wonder though, why Veronica smells of absolutely nothing and as such Hotdog has no thoughts on her whatsoever. Maybe Hughes feels that our first introduction to Veronica in the story, where she is sitting ‘supervising’ Betty who is engaged in manual labour, says all that needs to be said about her as an individual. In fact I suspect he was writing for an already well established audience who need no back story to understand the characters motivations and complexities and therefore would have already seen the twist coming at the end of the tale…  Paula Harris