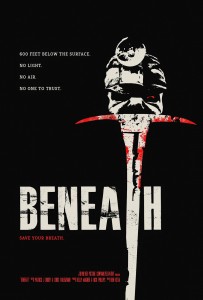 Beneath DVD (2013 Dir. Ben Ketal)
The concept is hardly new. In ‘Beneath’  a group of miners become trapped underground, the air begins to turn toxic and, as sanity slips away from them, they paranoid and ultimately violent. Mines and caves make easy settings for horror films (‘The Descent’, ‘My Bloody Valentine’ spring to mind).
However, this film very cleverly builds a tangible sense of claustrophobic fear which sets it apart from other similar undertakings. Its leading character, Sam (Kelly Noonan) is the daughter of long-serving coalminer George Marsh (Jeff Fahey). In a drunken assertion of girl power, she decides to join dad on his last shift in the mine.
Sam’s naivety about the reality of being deep underground is shown the moment she steps into the mineshaft lift. Once events take a turn for the worse and she is trapped with her father’s crew, her increasing feelings of being watched and hunted provide the viewer with a compelling sense of the terror that humans must feel in similar real life situations.
The film is apparently ‘based on true life events’ – I’m not a fan of this phrase. However, ‘Beneath’ uses this in a clever way, leaving the audience wondering if the unfortunate crew have encountered supernatural malevolence, or have, quite simply, lost their grip on reality. Either way, it’s a great watch. Claire Chapman